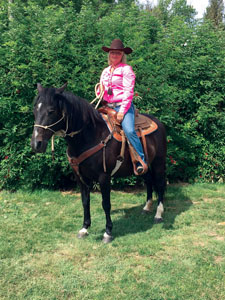 (Photo Submitted) THINK PINK: Sue Meier and Summer, pictured above, will be travelling the entire length of the Pink trail, starting Aug. 12, to raise money for the Cancer Research Institute of Northern Alberta.

For some horse riders, it is equal parts the journey and the experience. That’s why Sue Meier will be will be spending the better part of a month riding through Alberta on the back of a pink horse.

Meier, alongside her Quarter/Morgan cross horse Summer. will be one of the few long-riders in the 8th annual Wild Pink Yonder ride, a 23-day trek across Alberta to raise money for the Cancer Research Institute of Northern Alberta.

“I wanted to do all or nothing,” said Meier. “Just to conquer and experience.”

Meier had gotten into horses when she was a little girl, although she didn’t start riding until about 15 years ago.

“I have a great love for animals. It was a passion since I was a young girl,” said Meier, adding that it began a thing for her daughter an herself to ride together. “One of my goals was to buy a horse; and that’s how it all got started.

“I love riding, there’s a lot of thinking that goes on when you’re riding, and a lot of relaxation.”

The proposed trail this year will start in Stirling on Aug. 12, with the riders heading south through Writing-On-Stone Provincial Park before spending two days in Coutts. They will then hit Raymond and Coalhurst before entering the Municipal District of Taber on their way to Vauxhall, which they are expected to arrive in on Aug. 17.

From there, they will travel north, visiting communities such as Carmangay, Strathmore, Drumheller, Olds — where they might get a chance to see wild horses —and Innisfail, before finishing their ride in Lamont, if all goes according to plan.

Meier has had family members who have suffered from different kinds of cancer, but has been lucky enough to have never had I herself.

She believes the Pink Trail is a good cause to work for, and, as this will be the last year of the 23-day ride, she wanted to ride it.

“It was something, a passion, that I waned to do and help out… Cancer is everywhere, and it is a good cause.”

This will be the first time that Meier will participate in the horseback fundraiser. While she has participated in endurance rides before with Summer, who has an excellent build for such rides, they have typically lasted a few days.

The 23-day ride will be a challenge, as it will be longer then anything she’s done before.

“I’ve done endurance rides before, and they are like a weekend long kind of thing, and do 25 km in four hours or whatever, in one day. Now, when I look at this, I think, ‘Wow, that’s an awful lot’, but it was mapped with the endurance of the horse,” said Meier.

“It’s four to five hours of riding every day, which that will show me, can I do it? Am I able to do it?”

Although she will have a bit of home sickness, Meier if looking forward to seeing how well she does on the ride, as well as seeing some beautiful Alberta countryside.

Her daughter, Titania, will be able to join her for a few days when they reach Coalhurst, and her husband, Jim, will be joining the ride as a volunteer for the latter half of the trip after Aug 21.

For more information on the Pink Trail or to sponsor Meier as a rider, visit http://www.wildpinkyonder.com.