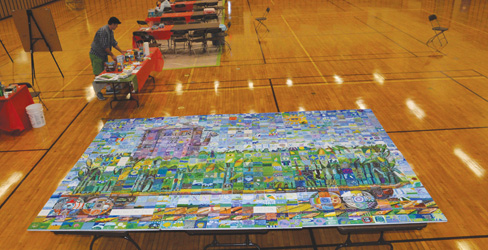 Taber’s colourful contribution to Canada’s sesquicentennial celebrations in 2017, a large-scale mural as part of the Canada 150 Mosaic Project is now awaiting the selection of a display location for the community.

Selected as a participant, the town hosted painting sessions for residents to paint tiles to be part of the mosaic from May 31 to June 2. The completed tiles were combined to create a mosaic that represents Taber, and will serve as a contribution to an even larger national mural which will be on virtual display in Ottawa in 2017.

“It was quite a community-building three days,” said Amanda Lawrence, FCSS youth empowerment coach and an organizer of the event, speaking at town council’s June 27 regular meeting. “It was pretty incredible.”

Lawrence co-ordinated the event with town administration, and is now seeking direction on where the finished mural might be displayed in the community.

“The fourth step is just the unveiling of the mural, so it’s up to you guys to kind of decide where that’s going.”

“All these tiles were painted by people in our community,” said Lawrence. “Some amazing talent, it was just fascinating the energy for those three days, and the talent and the painting, it was just awesome.”

A heavy contingent from area schools boosted numbers for the event, making it an all-around success for Taber.

“We got every school on board to participate in this. So my network between Family Connections and FCSS really put this together, and it was a phenomenal experience. We had 236 students attend.”

Artists were allowed to paint virtually anything they desired, as long as it conformed to a pre-determined colour scheme selected by the artist-designers, who hail from St. Albert.

“Basically, they were allowed to paint whatever they wanted on the tiles, as long as it stuck within the colour concept that they wanted,” said Lawrence.

In determining a location for the 8’x12’ finished mural, administration’s preference was to hold a contest to allow the public to decide where Taber’s Canada 150 Mural Mosaic should be located, although one councillor already had a location in mind.

“I think it would make a great backdrop on the new stage that’s coming,” said Coun. Jack Brewin, in reference to the Taber and District Chamber of Commerce’s permanent Confederation Park Stage project, which is still planned to be completed before Cornfest in August. “People could see it, and it would be protected from the weather.”

Following discussion, council voted unanimously to receive the information from Lawrence, and directed administration on selecting a location for the mural display.