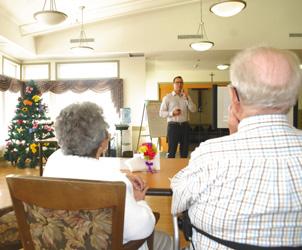 In the fall out from the backlash the Good Samaritan Society suffered during its information sessions to the public last week on its decision to go to a single provider (PharmaCare) to centralize pharmacy supports and services, middle ground has been attempted to be found by PharmaCare offering the leader of the opposition a job.

Carin Jensen, clinical pharmacist for Linden View which falls under Good Samaritan Society care, and pharmacy manager at Taber Co-Op led the initial charge of dissent as Taber Co-Op’s contract with Linden View is set to expire on Dec. 1, with PharmaCare taking over in a five-year contract. Pharmacies that have been providing pharmacy services to Good Samaritan Society sites have been getting notice that their contracts have been terminated and have been given six months notice, where eventually all medications will be provided by the fulfillment centre for PharmaCare, who has its head office in Edmonton, with the southern Alberta GSS sites being serviced out of Lethbridge.

Jensen cited no proper tender process being followed which Taber Co-op had to do with its contract along with timelines of medication being delivered among her concerns with the PharmaCare decision.

Also, levels of clinical care which Jensen noted would decline.

She encouraged Taber residents to write their local council, MLAs and provincial health bodies so that those concerns could be presented to the Good Samaritan Society.

But on the second day of the information sessions last Thursday which Good Samaritan Society and PharmaCare hosted, PharmaCare approached Jensen with a part-time job offer.

“The displeasure that residents/families and community had expressed I guess resonated with the GSS/PharmaCare people. They asked if I would consider becoming a clinical pharmacist for them in the south.”

“I said I would consider it, but only for Taber, and only if that is what the community, residents and families would like,” said Jensen in e-mail correspondence to The Times in an inquiry about the job offer on Thursday as the Times attended a Wednesday information session. “I recognize that Co-Op is more likely than not losing the contract to PharmaCare and if this would provide comfort and trust to the residents and families, I will consider PharmaCare’s offer. I would still have to talk with Co-Op to see if that would be OK, as my first allegiance is to my current employer.”

Jensen added the scenario was posed to those attending Thursday’s information session and there was a ‘resounding’ yes, that would work.

“Since the residents and families thus far seem happy with me staying on as the clinical pharmacist, I think this is a win for our cause. Not all the details have been ironed out, but GSS/PharmaCare are leaving with a lot of knowledge of how to handle situations such as this in the future. They apologized to me and I’m sure to the site for the misinformation that they had and will be more up front with things in the future,” said Jensen. “They also see the benefits of having local site management involved and could have learned a lot from the current site manager. Overall, I think this is a big accomplishment; we went in to this hoping to make enough noise that GSS would notice our concerns and they have in a big way. I think this is the best possible outcome from the whole situation and, if all works out with my negotiations with PharmaCare, we can move forward with more technology and continue to get the great care that the residents deserve.”

But, while on the surface, it may seem like a major concession by PharmaCare, concerned resident Rod Gough who has his mother at Linden View and attended all four information sessions, the job offer is but a band-aid to a bigger problem.

“The issue isn’t about Carin, it’s about what is this going to happen to Taber and the residents that are affected,” said Gough, adding Jensen’s care to her clients is excellent. “I have no idea how PharmaCare is as a company, but they could six months after the fact (the PharmaCare contract takes hold) make conditions so miserable for Carin that she quits or they will just fire her.”

The promises that Good Samaritan Society/PharmaCare may pull away from Jensen could also trickle down to Linden View residents who were concerned costs would go up as PharmaCare noted at the beginning of its presentations that they would not be offering the same rebate program as Taber Co-Op has.

“They haven’t actually said they are going to give us a rebate, but they’ve said they are considering it. But that was just in terms of diffusing conflict. Whether they actually follow through and give us a rebate, who knows?,” said Gough. “They can do whatever they want as soon as they have that contract in place and have kicked out our local people and start providing services.”

Gough sees The Good Samaritan Society move to PharmaCare as trend in the health care system, a trend that is not a positive one.

“Increasingly in the health care system they have taken responsibilities that were typically registered nurses and they have downloaded them on the LPNs, and now I think they want to download it from the LPN, to the person-on-the-street caregiver,” said Gough. “This drug system they are wanting to move towards allows that to easily happen. They are going to save even more money by not having truly-qualified people in my opinion doing the work there.”