Forced Barnwell homecoming for Francis due to Fort McMurray wildfires 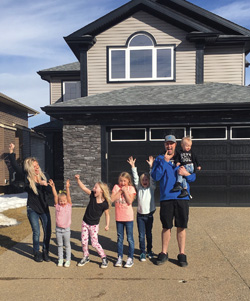 Mindy Francis used to go to Barnwell School. Now, the recently uprooted Fort McMurray resident thinks it’s funny her kids are now attending the same school, despite home being on the other side of the province.

“It’s funny, because when I was little I went to school in Barnwell,” said Mindy. “It’s funny being back, because I knew so many people, and it’s just like blast from the past, going through the old school, taking my kids through it, so it was pretty fun to see.”

While initially hesitant to put them in the school, her school-aged daughters – Kyal (10), Jayzi (8), Presley (8) and Laken (5) – were excited to go back, and it was good for them to get back into a routine, as the family is used to staying busy.

Her two-year-old son Parks isn’t old enough to go to school yet, but her daughters are back doing extracurriculars: gymnastics.

“The gymnastics centre in Taber let my kids come and join their program while we are her,” said Mindy. “All four girls are involved in that, and they are just loving that, and it was so nice of them to do that.
“It’s nice to have a normal routine, even if it’s not at home.”

The routine is welcomed, especially considering how just over a month ago, life was anything but that.

Mindy Francis had been out shopping with her sister Brittany Schaffer on May 3 in Fort McMurray.

When they left the mall at noon, they noticed the smoke and decided to call it quits. Mindy went home and stood out on her deck, and saw that the smoke had gotten even bigger. When she spotted the flames in the distance, that’s when she started to pack up the car.

Four of her five children were at school. Her husband, Dustin, was at work at Suncor, but was waiting on word to be sent home.

They had just moved into their home in Eagle Ridge two weeks ago, so everything was still packed, leading to a frantic search for hard drives that ended with Mindy simply packing their Apple computer into her car.

“That’s what I could grab at the time.”

She stayed at her sister-in-law’s, Jill Anderson’s, nearby house until Dustin got home from work. She went to pick up her kids from school just blocks away, to find them walking home after dropping their cousins off at their house. When Dustin got back from work, the family decided to get out of the city, mere minutes before the mandatory evacuation was ordered at 4:45 p.m.

“We weren’t sure what to expect. We assumed we would maybe be out on the highway for a couple of hours, so we brought our tent, camping stuff, and were ready and prepared to go camping on the side of the road or up to the plant they were evacuating to,” said Mindy. “By the time we got to the bottom of the hill, they were sending people south on (Highway) 63 again.”

Eagle Ridge is a sub-division located within the Timberlea neighbourhood in Fort McMurray. Situated north of the Athabasca River at the top of the hill, travelers have to go down the hill, go south on Highway 36 and across the river to reach the southern neighbourhoods of the city.

A neighbor’s family, Jill’s family – minus her husband who was also stuck at site – and Mindy’s family stuck together as they began the trek out of the city. It took an hour to get down the hill to Highway 36 out of Fort McMurray. Mindy couldn’t reach Jill or Brittany during this time, and she was later told that cell service had been cut. At one point they learned that the fire was forty minutes away, while traffic hadn’t moved for half an hour. Luckily, at that point traffic started to move.

“On our way out, there was things on fire, and lots of smoke and a few things had already been burnt down, because we were the second wave of people that were being evacuated, and there were things burnt everywhere. It was just crazy.”

Mindy hadn’t filled up on gas before they left, but Jill had full jerry that she used to fill up her car cans for her. Brittany wasn’t so lucky, and was running on fumes.

“I think she only had a little bit in her jerry can, and she was on empty. She called us, in a panic,” recalled Mindy, adding she had the call on video because they recorded the drive out. “She was out of gas, and her husband wasn’t with her, he was stuck at site. I told her to pull over to the side of the hill where there was a police officer – they were directing traffic where to go – and I said, ‘Pull over to the police officer, and he will help you put gas in your tank’, and she did. So she was able to get enough gas and get out of town.”

Once they were out of the city, the highway was littered with cars that were either out of gas or who didn’t know what to do next and needed a break. Brittany met up with them on the highway outside of Fort McMurray, where they gave Brittany some jerry cans of gas to make the five hour trip down the highway. From there, they figured out their next move, deciding to head down to Edmonton and wait.

“We were there for a half hour, trying to make a plan. We didn’t know what to do, where to go. So we decided just to head south and go to Edmonton, at least get our families safe for the night.”

The Fort McMurray wildfire has been raging for over a month now, and has burned more than 589,000 hectares and has crossed the border into Saskatchewan. There are about 2,300 firefighters actively battling the blaze, and have come from across Canada and as far away as South Africa to do so.

Approximately 3,000 buildings in Fort McMurray have been destroyed, the majority of which were homes in the Beacon Hill and Abasand neighbourhoods. Mindy’s house is still standing, but for the first three days after they left he city, she believed that it wouldn’t be standing, as it backed onto a tree line.

“My kids were in a panic. My one girl… she was in tears as we were leaving, and she was really, really upset, because we worked so hard to buy this home. We lived in Fort McMurray for nine years, and we all know how expensive homes are up there. So we really worked hard to get this home and she was just devastated and thought our house was going to burn down after we worked so hard to buy it. It was really hard to see my kids effected like that.”

Mindy, Jill and Brittany’s families ended up headed down to Taber and Barnwell, since they had family there. Mindy had grown up in the Taber area, and actually went to Barnwell School, where her children are attending now, and are staying with in-laws. Jill’s children are also attending school in Barnwell.

“We figured it would be the most stable for our children, so we brought them here and put them in school. They’ve adapted so well, and they’ve been so great, just resilient with what’s been going on. My sister-in-law, she came here as well, and so her kids and my kids could be together, so it wasn’t so new and strange, and they could have some familiarity.”

Although they are allowed to head home now for the voluntary re-entry, Mindy says she doesn’t feel comfortable heading back just yet, and wants to wait until at least June 15 before heading back, citing health concerns as a major reason why.

“It’s not the most safest that way,” explained Mindy. “Once the hospitals are back up and running and grocery stores are fully stocked, and things have kind of died down, they’ve worked all the kinks out and things are a little more ready for everyone to return, I think that’s when we will… We’ll kind of play it by ear. I want to get home, but I also want it to be safe.”

That being said, she will be glad to be back in their new home. They had just set up the kitchen table, and are waiting on furniture that’s been sitting in Edmonton.

“I’m looking forward to moving Back into our house and unpacking,” laughed Mindy. “Just getting our life together, which we were in the process of doing, just getting ready to enjoy a summer in our new home, with a yard the kids can play in. I can’t wait for that.”