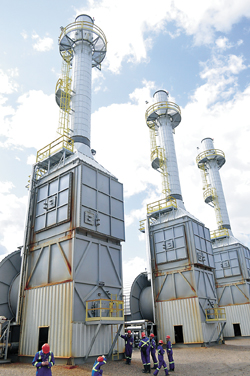 On the ground in Fort McMurray to assist with emergency operations in late May, the Town of Taber’s planning director Cory Armfelt was shocked by the devastation he witnessed upon entering the deserted city.

“There’s areas that look exactly like the pictures that you’ve seen. To see entire neighbourhoods devastated by fire is absolutely shocking,” said Armfelt in an interview last week. “It’s not something that very many people have ever seen. It really takes you back.”

Armfelt, who was seconded to Fort McMurray to assist with emergency planning and logistics, arrived in the evacuated city on May 20, and was back in southern Alberta by May 24.

As witnessed by Canadians, many of the thousands of images trickling out of Fort McMurray are almost post-apocalyptic in their depiction of the devastation wrought by wildfire. Armfelt admits the city took on an element of the surreal for emergency personnel working there prior to the official public re-entry period that commenced on June 1.

“It was fairly deserted. There were people moving, but a city of 80,000 was down to maybe 300-400 people there working on the actual emergency. There was about 100 RCMP officers there, and they had everything shut down so that you couldn’t get in, or coming off Highway 63, there was checkpoints. We got a security tag and a wristband that allowed us to move around freely, but we had to show that to the RCMP at checkpoints. It was certainly surreal — there was no reason to stop at the red light. It hits you in a different way — you’re in a situation where no one is messing around here. It’s serious business. You’re not a tourist.”

Never having been involved in this type of emergency situation in a professional capacity before, prior to his arrival Armfelt experienced a degree of trepidation about his potential usefulness — a fear soon dispelled once the planning guru got his feet wet.

“If you have this training, if it’s set up, you can just fall right in and be productive. Before I got there, you kind of worry about am I going to be wasting everyone’s time. On the way up, there’s self doubt, about potentially being a liability instead of a benefit. But once you get on the ground and see what’s happening, and you understand the framework of what’s going on, you can be productive.”

Armfelt explained the emergency planning system that is implemented on the ground in these kinds of emergencies.

“During emergencies, there’s a system that gets implemented called the Incident Command System, which was developed by wildland firefighters in California. It works for basically any emergency, and it’s just a framework for how you’re going to deal with the emergency, and there’s basically four critical components of it: logistics, operations, planning and finance.”

Long days on the job were followed by a few hours on a cot in a makeshift sleeping area at Keyano College.

Requisitioning materials for requests was a big part of the planning director’s work on the logistics side of the emergency equation in Fort McMurray.

“On the logistics side, we would either get calls for requisition of materials, or people would drop in and fill out their requisition form. There were some vendors that were operating in support of the emergency operations in Fort McMurray. Whatever people were looking for, we started just going down the list of the vendors that were operating there — I sourced everything from thumb drives to concrete barriers to fire axes.”

Returning the city to some semblance of normality — including the critical task of getting goods and services accessible for returnees — was a large part of Armfelt’s work in planning.

“On the planning side, I was really focused on the re-occupation, re-entry side of things. So we were calling businesses considered to be critical businesses to get up and running prior to the re-entry of some residents. So grocery stores, pharmacies, gas stations, fast food, convenience stores — so there would be some necessary services open prior to the re-occupation.”

One area of emergency operations that Armfelt didn’t anticipate was a security-enforced emphasis on cleanliness.

In order to prevent the undue inhalation of heavy smoke in the area, personnel were issued protective equipment for use outside the emergency operations centre.

“The smoke, (after) the first couple of days the wind changed a little bit and pushed a lot of the smoke to the east. But the first couple of days that we were there, it was so smokey you could just see across the street. We were issued pretty sophisticated breathing apparatus, particulate masks, for when you went outside. Inside, they had big air purifiers running, so the air inside the building was being purified a lot, so what we were breathing inside was pretty good air.”

Now back on the job at the Town of Taber, Armfelt was careful to single out the municipality’s staff for praise.

“It just goes to show the level of respect the province has for the Town of Taber, to be called. Steve (Munshaw, fire chief) went up, and I went up. So it’s for sure a level of respect for the training that the employees here have gotten over the past few years, that we would be considered to go up and help out. I think that reflects well on the municipality.”