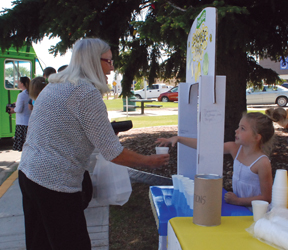 Bria Hall had wanted to hold a lemonade stand for ages. When she learned about the 80,000 people who had to evacuate Fort McMurray due to the wildfire, she wanted to help, and both things just went together.

“When people buy lemonade, they can give money, and we can give the money to them (Fort McMurray),” said Bria.

Bria set up her stand in two locations. The first was by Cenotaph Park around the noon hour, and the second place was by St. Patrick’s Elementary School by the soccer fields in the evening.

“We saw the fire fighters collecting money, doing their boot drive,” said Linda Hall, Bria’s mother. “That’s when I explained to her what they were doing, and she wanted to do something to help.”

While the family didn’t know anyone from Fort McMurray, Bria’s uncle, Scott Ford, is a firefighter from Red Deer, and is currently battling the blaze in Fort McMurray. One of Bria’s classmates had lost his house in a fire before Christmas last year, so she understands the impact fire can have on a family.

Lemonade was 50 cents a cup, although everyone was welcome to donate more if they wanted. From the sale, Bria raised $476 to donate to Red Cross for Fort McMurray, “lots”, just as Bria predicted.