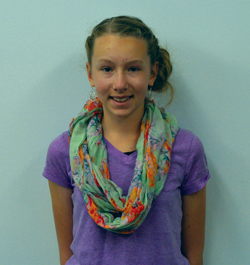 A D.A Ferguson student has been recognized as one of the best young writers in the province.

While Grade 6 student Megan Lumley had originally written her story for a Language Arts assignment, her parents and teacher had encouraged her to submit it into the Martyn Godfrey Young Writers Award, hosted by the Young Alberta Book Society.

“I mostly just (write) in school, mostly for LA projects… I like describing things. I like settings and nature,” said Megan. “We had to do it first as an LA project, and so I changed it a little bit to enter it into the contest. I lengthened it and changed a lot of the descriptive parts.”

At the end of April, she got the call saying that she was the Grand Prize Winner for elementary students.

“I’m pretty excited about it.”

“As a family, we’re very proud of her efforts and her hard work has definitely has paid off,” said Shane Lumley, Megan’s father. “She laboured over it fairly extensively, you know, to get the detail just right – like I was mentioning earlier, she is pretty detailed oriented anyway – and writing it and rewriting it, and having her sister proofread it so she could get it just right, you know, and Googling the appropriate words for spelling and that sort of thing. We’re very proud, we just think she’s fantastic.”

As the Grand Prize Winner, Megan received a collection of books from Albertan authors, an Indigo gift certificate so she can buy more books and David Poulsen, an author from Claresholm, will visit her school.

“He writes a lot of cowboy, western stuff,” said Jenna Green Megan’s grade 6 teacher at Ferguson, adding that they still need to set a date for a visit. “I’m really proud of Megan… Once I gave her the rules and guidelines for the contest, she did it all on her own – expanded it, changed it, took my feedback and did it (in time). It’s all her, it’s all her talent.“She’s a good student and a good kid, and she definitely deserves this.”

Megan’s winning story is ‘The Clouds Have Darkened’, about a girl named Isabelle who is set to go on a boat trip with a friend. When the friend can’t come, she goes by herself with the ship’s captain, Gillian. But they get lost at sea, and are lucky to come upon an inhabited island as they try to return home to England.

“Her parents were going on a different trip, so she was suppose to be going with her friend, but her friend couldn’t come, so then she ended up going by herself,” explained Megan.

When she gets older, Megan has plans to write and “would like to illustrate her own books”.

She is thinking about on writing a sequel to her winning story for next year’s MGYW Award, for the junior high category. But until then, she has a lot of books to read, starting with a short series that she has her eye on.

Megan’s story can be found online at http://www.yabs.ab.ca/documents/MeganLumley1.pdf.