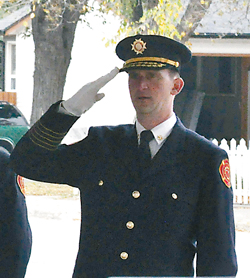 Seconded for seven days to the Provincial Operations Centre in Edmonton to assist with emergency management of the Fort McMurray wildfire situation, Taber fire chief Steve Munshaw is now back in the community ready to manage emergency situations closer to home.

On May 5, Munshaw was asked to go to Edmonton to assist with the Fort McMurray situation at the Provincial Operations Centre (POC), to provide relief for a management contingent that needed to rotate out.

Required to respond quickly to the request, CAO Greg Birch authorized the decision, arranging coverage in Taber prior to Munshaw’s departure and determining the secondment would not put local fire response at any risk.

“My job — I was requested by the Office of the Fire Commissioner — was to sit in their stay in the Provincial Operations Centre in Edmonton, and to be the representative with another gentleman, Peter Krich,” said Munshaw. “So we went to work on Friday, May 6, and we were released on Thursday, the afternoon of May 12. In that time, were able to represent the Office of the Fire Commissioner in different aspects of gaining other resources, being fire trucks and municipal firefighters. Our whole job was focused around making sure that Fort McMurray had enough structural firefighters, or structural firefighting equipment at their disposal, what their needs were at any given time, and being able to support any needs of the Provincial Operations Centre. And to answer questions of any ministry — basically advice — as the Office of the Fire Commissioner representative.”

Witnessing and contributing to so many federal, provincial and municipal organizations working together to manage the emergency situation still prevailing in the Fort McMurray area was a remarkable experience, according to Munshaw.

“Being up there was an absolutely amazing experience, to have your entire province working together, all the ministries, Environment, Municipal Affairs, Highways, CP Rail, media requests, information requests, RCMP, Canadian military support — they were all in the same room, and all of them functioning together to allow the entire province to function as one. It was a big honour to be requested by the Office of the Fire Commissioner to go up and work with them.”

Munshaw has been involved in the management of emergency situations in the past, but not in Alberta.

At their May 9 regular meeting, town council voted unanimously (6-0) to authorize CAO Greg Birch’s decision to allow fire chief Steve Munshaw to assist at the Provincial Operations Centre in Edmonton in support of the Fort McMurray disaster response, and agreed to support his wage and expenses as a municipal contribution to assist with that disaster response.

An addendum to the resolution called for Munshaw’s wages and expenses during the secondment — if reimbursed by the province — to be donated to the emergency services of Fort McMurray.

As part of that same resolution, council also authorized Coun. Randy Sparks, chair of the town’s Emergency Management Committee, and CAO Greg Birch, to jointly make decisions regarding other staff members should there be a future sudden request for assistance, provided the secondment is no longer than 14 days.

In a special decision earlier this month, town council had authorized the deployment of four volunteer firefighters and a wildland unit to assist with fire response if needed, although those resources still currently remain on standby as of Monday.

“The province is still working, the Office of the Fire Commissioner is still at the POC,” said Munshaw. “Because there’s so many fires, there’s so many things happening, especially in the north right now, people are still on standby. At this point in time, our area is not looking too bad, we’re in a fire advisory instead of a provincial ban. And so our guys are just on strictly standby in case they’re needed.”

Planning director Cory Armfelt was also on a list of of potential individuals that could be requested to respond to the emergency situation. Armfelt has taken several ICS courses, and has focused on the planning component of an emergency command centre’s operations. According to administration, the province requested that he consider assisting, but he has not yet been officially requested for deployment.

According to administration, Chief Graham Abela had also informed Taber Municipal Police Commission chair Ken Holst that the Taber Police Service may be asked to provide policing support to other southern Alberta communities, in recognition of the shift of 300 RCMP officers to the Fort McMurray area, leaving other areas of the province a “little thin” in terms of police numbers.

Munshaw, who indicated his stint assisting with emergency management at the POC had often involved 20 hour days, is now recharging his batteries after returning to Taber.

“Our guys are still on standby, but it’s very minimal. There’s fires happening everywhere, and of course the Town of Taber is going to help out, anybody that makes a request, as long as our town is also safe. Our number one goal is to make sure our town and M.D. of Taber have enough resources to support that need,” said Munshaw.