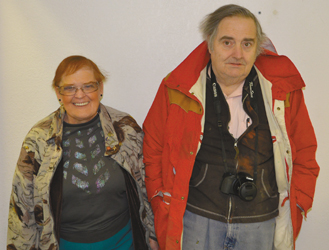 A Taber couple, Charles Ruhlmann and Marie Falck, potential victims of an online scam they uncovered recently on Facebook, are taking their story public.

Every year, Canadians lose millions of dollars to the activities of scammers who bombard individuals with online, mail, door-to-door and telephone scams. Although the couple didn’t forward any funds to dubious parties, they were concerned enough about others being scammed that they felt a need to raise awareness about the issue.

Falck and Ruhlmann, firm believers in the adage that “if it’s too good to be true, it probably is’ had enough smarts not to forward any funds.

“So I said I couldn’t do it until after I received the cheque, because I wouldn’t have enough money in my bank account to cover that. I’d just finished paying all my bills. Where is that money going to come from? Down from heaven? Right.”

Despite being wary, Ruhlmann was concerned others might be sucked into the scam, which purports to be representing an official source, namely the social media website Facebook.

“It’s being promoted as if it was from Facebook. A lottery. They also presented it as a promotion. They presented it two different ways.”

Falck related another incident on Facebook in the past, involving a degree of identity theft, which had ended up victimizing one of her Facebook friends.

“One of my good friends — I write inspirational poetry, and he writes poetry, too — asked me if I’m the one who got his money. He was accosted by someone pretending to be me, using my picture on Facebook, and saying it was me but it wasn’t me, and he sent this money to this individual, whoever she is, $500 and some odd dollars.”

Falck even corresponded with an individual purporting to be a Facebook representative — a Gloria Mullinax of Salisbury, N.C. — just to see where it might lead. Falck was then forwarded supposed winning access codes — with the caveat that a money order for $560 be sent first — and also received calls and texts.

“I went along with her story just for the fun of it, but the wheels were rolling in my head. If it’s a fictitious name, that I don’t know.”

She warned others to never forward money to individuals or organizations if you have the slightest question about their authenticity.

“I’m a little bit smarter than that. I’m not going to put myself totally in the hole,” said Falck. “I want people to know so that they don’t get scammed, and fall for their lives. I think it’s important to bring it to the public, so if they’re thinking that way, they don’t go ahead and do it if they have the cash in their bank account thinking they’ll get some extra money.”

Falck and Ruhlmann indicated they were planning to notify the Taber Police Service about the online scam.

If you think you have spotted a scam or have been targeted by a scam, individuals are encouraged to contact their local police, the Canadian Anti-Fraud Centre (1-888-495-8501, http://www.antifraudcentre.ca), or the Competition Bureau’s Information Centre (1-800-348-5358, http://www.competitionbureau.gc.ca) for information and assistance.