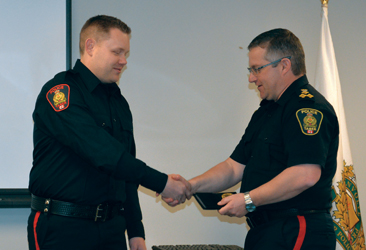 Taber has a new police officer, even if he isn’t all that new to Taber itself.
Having grown up in Taber, Mark Valgardson is returning home after 16 years, to serve as a constable for the Taber Police Service, and was officially sworn in on April 1.

“I’ve been away for quite a few years, so there is still going to be some learning for me in the next few months,” said Valgardson, adding that he had come back to visit family a few times each year.

Valgardson had first left Taber for Calgary when he was 18 after graduating high school, originally to train as a pilot. Ten years later, he left flying behind to become a police officer.

Valgardson went on to join the RCMP in Saskatchewan, where he worked as a general duty police officer and was stationed in various communities and First Nations Reserve in Rose Valley and the Saskatoon departments.

While he enjoyed his work with the RCMP, moving around constantly did have its toll. As he had two young children with his wife Jennifer, he wished for a more stationary job. That’s why he applied for – and accepted – a position on the Taber police force.

“The main reason why I decided to move back to Taber was for my family,” he said, adding that his wife is also from the area, from Raymond to be exact.
“Just so my family didn’t have to be uprooted every 3-5 years and moved around, because that’s what kind of happens with the RCMP.”

Currently, Valgardson is undergoing training, despite his prior law enforcement experience. In addition to the orientation paperwork, there are small differences, such as firearms, that he needs to learn.

“The training is a little bit different then the RCMP,” said Valgardson. “I just have to go through the cross-over training and become familiar with how they do things in this police department.”