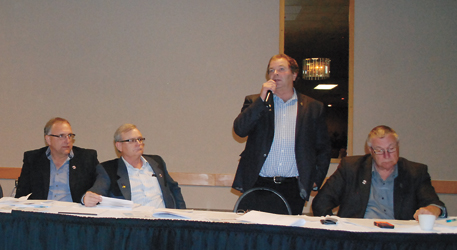 The M.D. of Taber announced last month that the municipality would be terminating the current fire services agreement (giving a required one-year notice) with the Town of Taber, and creating their own rural fire service in its place. The new rural service is set to commence March 1, 2017, and will serve divisions 1-4.

“As I’m sure as you’ve guys have read over the last couple of months of this controversial decision, we made a decision that was extremely difficult. It wasn’t done overnight, it was done after a year of negotiating with the town,” said Brian Brewin, reeve for the M.D. of Taber in opening remarks on the fire department issue.

“I’d like to start off by thanking our volunteers. This was not about the volunteers. We appreciate the work that they have done for us over the years.”

Brewin noted a driving force for the M.D. of Taber in its decision to terminate the fire agreement with the town was the lack of input the M.D. was allowed.

Another concern highlighted was the lack of a citizen complaint resolution mechanism.

“If a M.D. citizen has a problem with how a fire was handled or dealt with, we really had no recourse. We had no say in any changes or how can we make this better. We feel if we are going to pay a big portion of this, we should have a say, or the citizens should have a say with how this is dealt with,” said Brewin.

Brewin noted the M.D. of Taber currently operates four fire departments with departments in Grassy Lake, Hays, Enchant and Vauxhall. The M.D. also currently contracts out a service through the Town of Taber in the surrounding areas around Taber.

“One of the challenges we’ve been having is we’ve grown and changed and we need additional support for our small rural fire departments,” said Brewin.
“The Town of Taber agreement, we currently have three full-time people that we have hired as part of the agreement. For a similar cost, we are able to provide that same service to help out Grassy Lake, Hays, Enchant and Vauxhall. The paperwork that is needed for these small (rural department) chiefs is ever growing to make sure their equipment is up to standards along with safety codes. These are all volunteers who do this on their own time.”

In the information pertaining to the M.D. terminating the fire services contract with the Town of Taber given to people at the AGM, it stated in excess of 50 per cent of the M.D. fire budget was used to pay for fire service provided by the Town of Taber with the balance of the budget being used to operate four other departments.

The proposal the M.D. had brought forward was an agreement to pay $255,000 in fire operating costs, as well as the M.D., at its own cost, provide all the equipment needed for a rural fire service.

“Highway revenues attributed to having highway accidents, which is paid for by Alberta Transportation, would be split 58 per cent to the town and 42 per cent to the M.D.,” said Harris of original contract negotiations the M.D. thought they had a a gentlemen’s agreement with earlier. “It was agreed by the committee that this proposal would go back to both councils for review (September 2015 meeting). However, this did not occur. We were informed by an Oct. 2 letter from the mayor that the town would not be returning to the negotiating table and that the contract that was attached to the letter that had terms and conditions that were not agreed to by the M.D. of Taber would prevail. As you can imagine, we were very disappointed receiving this letter. We can’t understand why the fire chief and administration turned down this offer presented and agreed to by the town councillors that were part of the negotiating committee.”

Facing the options of agreeing to a contract the M.D. did not agree to, or starting its own rural fire service, the M.D chose the later, and at its Nov. 10 meeting, administration authorized terminating the agreement with the town effective Feb. 29, 2016 for a one-year notice.

“Recent comments by the fire chief about additional costs the M.D. is going to occur is only partially correct. We are going to occur large capital expenditures, however we were planning on occurring these costs regardless, as our September fire agreement proposal we had for the town included this equipment anyway. Fire equipment is a long-term asset. Although costly, amortized over the lifetime of the equipment, it is not cost prohibitive.”

Harris highlighted irritants the M.D. has had over the past number of years of fire agreements. Back in 2007 it was agreed by both councils that they were going to implement a bylaw to allow for fires that took longer than two hours to extinguish.

“The M.D. enacted this bylaw so that anytime you guys had a fire that took longer than two hours to put out, you don’t get a bill from the Town of Taber. The town never enacted the same bylaws, so a town resident could have a fire that goes on all day long and they are not going to get a bill. The bill would come to the M.D., but we would not pass the bill onto you guys, we feel it’s unfair that M.D. residents have to pay for fires that last longer than two hours and the town doesn’t.”

Harris added the M.D. does not believe it needs to train firefighter volunteers for oilfield fires.

“We believe that if such a fire were to occur, our volunteers should contain any secondary fires, maintain the scene and let professionals come in to battle the fire, and the same is true with rail lines,” said Harris. “We do not feel we should put our volunteers in that kind of harm anymore than is necessary.”

M.D. councillor Bob Wallace keyed further on the levels of service as those who attended the AGM earlier this month were given a 60-page information package to view.

“It is the intention of the M.D. of Taber to provide a level of service to the M.D. of Taber regional fire department in a similar fashion as the Vauxhall Regional Fire Authority,” said Wallace, highlighting parametres for volunteer training for competencies, structure fires, emergency plans, wildland grass fires, vehicle collisions and extractions, trench rescue, hazardous materials, power lines and ice rescues. “The department will not do first response when EMS is not available. It is the role of the province to administer ambulance, EMS service.”

Wallace wanted to highlight the capabilities of the M.D.’s rural fire services in Vauxhall, Hays and Enchant which M.D. rural service will mimic in 2017, taking offence to earlier published comments of perceived subpar capabilities of small rural fire departments.

“They are almost identical,” said Wallace.

Due to space constraints, look for the Q&A portion of the M.D. of Taber AGM involving the M.D.’s decision to start its own rural fire service in 2017, in next week’s Taber Times.