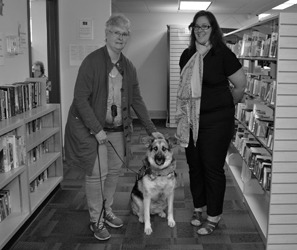 April is Parkinson’s Awareness Month, and this year, the focus is on stories.

Parkinson’s disease is a progressive neurodegenerative disease, the second most common one after Alzheimer’s disease. Parkinson’s cases are expected to rise by 50 per cent over the next 20 years, and there is no known cause or cure for it yet. In Alberta, over 10,000 have been diagnosed, with 800 being diagnosed in 2014 alone, and the average age of diagnoses is 56 years old.

Parkinson’s Education Day will take place on April 16 at the Lethbridge Senior Citizens Organization (500 – 11 Street), from 8:30 a.m.-3 p.m. There will be three main speakers, and Taber’s Katharine Hockney is one of them.
“It’s a journey, the beginning of a new life,” said Hockney. “And that’s the way I’ve taken it, rather then be down and out about the disease, I praise the Lord and thank him that’s all he gave me.”

Hockney was diagnosed with Parkinson’s in 2005. While in the beginning, the only signs she exhibited were shaking hands and “jumping” feet, the retired ER nurse has noticed that her symptoms have gotten worse in the past year, in that she is starting to lose her balance. But with the help of her service dog Sally, she is getting steadier.

“I know what it’s like to be trapped in a body riddled with Parkinson’s. There’s a lot of depression, a lot of ‘I can’t do it anymore’, feeling sorry for yourself, it’s not fair. But mostly depression, because my right arm is diminished in what it can do, and even though I talk to it and tell it it’s got to behave, it doesn’t always listen. I just thought if I could bring a glimmer of hope to one person, I made a day.”

Hockney had first gotten a service dog 15 years ago, to help with her PTSD – due to years of working as an emergency room nurse and abuse – but she and Sally are training together to help make life easier.

“She’s become my medical prosthesis,” said Hockney. “I’ve got a beautiful harness that has a handle on the top, and she steady’s me now as we walk, so I’m not falling as bad.”

Hockney is a portrait artist, and prefers working with chalk, pastel, and sandpaper, pen and ink and a sepia prisma-pencil – to create an old-fashion looking picture. After leaving nursing, she opened up an art studio and began teaching. She also worked as a Colour Therapist with children with ADHD and autism with various schools. While she doesn’t teach anymore, she plans on using her artistic skills during her presentation on Awareness Day, and teach attendees.

“Because of my Parkinson’s now, I can’t do the portraits as tight as I used to, I guaranteed a total likeness, nobody would ever guess who that portrait was, it looked like them. But I can’t get that preciseness for me, I’m the perfectionist,” said Hockney. “I turned into Picasso, and that’s what I’m going to be teaching the people at the event on the 16th, is that we don’t have to be perfectionists, but we can enjoy life and take pleasure out of creating.”

Hockney has a theory that the famous 20th century painter Pablo Picasso must have had Parkinson’s disease, as when comparing his earlier works to his later ones, one will find that his later works are no longer as crisp.

“In his earlier years, his paintings were crisp and just perfect, and in his later years, everything was disjointed. I’m sure that that’s because he had Parkinson’s.”

It’s very important to talk about Parkinson’s, says Hockney. Although you feel normal, let your family and friends know what is happening, as they will notice.

“Be honest with people so they know what they’re working with. And have an attitude, that when you wake up in the morning, it’s a new day. And try to learn as much as you can. Parkinson’s doesn’t rob your brain, it robs you mobility,” said Hockney.

It’s also important to look after the caregiver. While the person with Parkinson’s needs help, the caregiver also needs support as well.

“It’s frustrating, to watch a loved one deteriorate and not know why or how you can help, and realize you can’t.”

While our knowledge of Parkinson’s has grown exponentially in the 20th century, it wasn’t fully documented until the early 19th century. However, history has traced symptoms of Parkinson’s as far back as 12th century BCE, where an Egyptian papyrus told of a king drooling in his old age.

Parkinson’s disease is named after James Parkinson, an English surgeon who, in an 1817 essay, was the first to describe the symptoms of Parkinson’s in six individuals, symptoms of what, at the time, was called shaking palsy. Parkinson’s Awareness Month is in April since Parkinson was born on April 11.

Right now there is no known cure for Parkinson’s disease, it can only be managed. Drugs such as levodopa, dopamine agonists and MAO-B inhibitors are commonly used to treat motor-related symptoms, and exercise rehabilitation programs and palliative care can help slow the onset on Parkinson’s.

However, a drug used to treat cancer in leukemia patients called nilotinib has sparked interest. After a man suffering from both leukemia and Parkinson’s began taking the drug as part as his leukemia treatment, his Parkinson’s symptoms began to greatly inprove. A small test trial showed similar results in other patients. “Each case is actually unique. There’s no two people alike in this entire world that have the same issues, that have Parkinson’s illness. It’s completely individual,” said Zadnik.

“The need for the education and research is the fact that they (who have Parkinson’s) can live very efficient, very high functioning lives with proper medication and the right programs available to them. They can live a very healthy quality of life, as long as they are receiving the medication and treatment.”

A support group for Parkinson’s disease takes place in Taber every second Tuesday at the Taber Public Library, from 10 a.m. to noon. The Tulip campaign will be at the Taber Co-op store on April 18.