Supper/auction brings out the STARS in community support 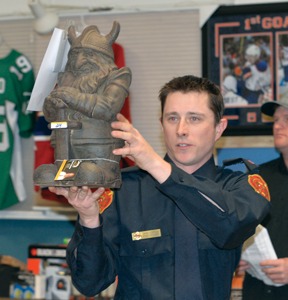 The North American economy is currently in a downturn. Apparently supporters of the 21 Annual STARS and Taber EMS Charity Auction didn’t get the memo.

“It was one of the biggest supper crowds we’ve ever had. For the crowd itself, we usually fill the room by 8:30-9 p.m. and we were setting up extra chairs at 7 p.m.,” said Jack French, a long-time volunteer and organizer of the event, with the latest happening this past Saturday at the Taber Legion Hall. “It was definitely one of the largest crowds we’ve ever had.”

From an auction standpoint, organizers were a little worried at first about donations because there have been service companies that have left town during the economic downturn that would give items to the charity auction. But those concerns ended up being unfounded with the flood of support.

“We probably ended up with an equal amount of items as previous years, if not more. And it was good quality, neat stuff.”

An International tailgate bench, Brandon Davidson jerseys, engraved park benches, the list went on and on of items that were donated with many selling for thousands upon thousands of dollars individually.

“Last year’s auction was $104,000 with $50,000 going to STARS, $40,000 to Taber EMS, $6,000 to the Central School Breakfast Program, $2,500 to the Food Bank, $2,500 to Safe Haven Kid’s summer camp, and $2,500 to the Handibus,” said French. “We also keep a little extra money on hand in case any local emergencies pop up. There was that family in Barnwell where their house burnt down and we had some money available for kids’ clothes. Or if someone has a baby that is sick and they need to go to Calgary, we will buy some hotel rooms for them.”

Numbers were still filing in for the 2016 STARS and Taber EMS Charity Auction, but French estimates $125,000 was raised.

“I know a lot of people in the community and a lot of people in town, and there was probably 20 to 25 per cent of the crowd that I had never seen at the auction before and I didn’t even know their name,” said French. “We had a lot of new people come for this auction and obviously they feel it’s a worthwhile event.”