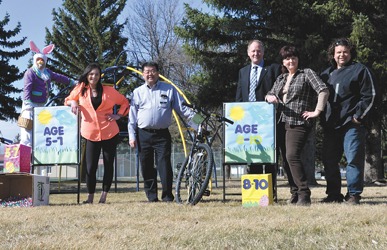 The annual Easter Egg Hunt turns 18 this year on Saturday.

Sponsored by The Taber Times, Taber Co-Op, the Heritage Inn and Taber Kinsmen Club, the mad dash to find all 12,000 eggs will start at precisely 10 a.m. at Confederation Park.

“Just seeing all the kids rushing to pick up eggs,” said Rod Yokayama, manager of the Taber Co-op. “It’s like watching them vacuum up the area.”

“When the gun goes off and you watch all those kids running out to try to find some eggs, it’s pretty cool,” said Glen Wada, member of the Kinsmen Club, adding that it’s good for community spirit. “It’s a good cause… It’s about the kids.”

Participants are asked to register beforehand and to get their ballot into the draws before 10 a.m.

The park will be divided up according to age groups for the hunt, so no one gets bowled over or snuck past when it comes to collecting eggs. Ages four and under will be finding eggs in the south part of the park by the playground, 5-7 year olds will be in the centre section and those 8-10 will be in the northernmost part of the park.

For those not in the hunt, refreshments will be available in the form of coffee, juice and donuts – it is Easter weekend after all, so you can indulge your sweet tooth – to enjoy while you watch the spectacle while kids efficiently rob the park of candy confectionaries.

“I’ve shot pictures for the event numerous times over the years and there’s just an electricity in the air right before the event happens. It’s a bunch of families getting together, making some small talk and strengthening bonds,” said Greg Price, editor of The Taber Times. “It’s one more avenue families can choose to spend some quality time together as they gather for Easter festivities.”

Taber Emergency Services will be on hand with their equipment and fire trucks, giving kids a chance to see it up close.

And of course, they will be on hand in case crowd control is needed for when the holiday’s special celebrity, the Easter Bunny himself, makes his appearance.

And yes, there will be prizes to be won, including three bikes, donated by the Kinsmen Club, to be won in a series of draws. One bike can be won in the four and under group, one in the 5-7 year old group and one in the 8-10 year old group. But remember, all ballots for the draw must be in by 10 a.m., before the hunt starts, and you must be present at the time of the draw, if you want to claim your prize.

“Kids have to submit a ballot, to enter their name, right at the hunt,” said Yokayama. “So they’ll need to get there a little bit early to register.”

The custom of giving eggs has gone as far back as the ancient Egyptians, Gaul, Persians, Greeks and Romans, who believed that eggs were a symbol of life.

EASTER EGGSTRAS: During the medieval ages, during Easter celebrations egg-throwing contests were common.

A priest would toss a hard boiled egg to a choir boy, who would toss it to another, and so forth until the clock chimed 12, and the boy holding the egg at that time would be declared a winner.

Egg hunts can be traced as far back as the late 17th century, along with the first appearance of the Easter Bunny.

The name Easter comes from the Anglo-Saxon goddess Eostre, who is commonly associated with spring and has an egg-laying rabbit companion.