Leahy honoured as Senior of the Year 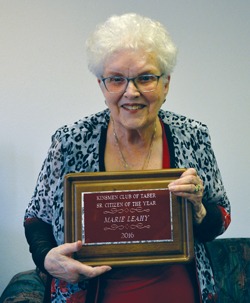 Marie Leahy was a little awestruck when she found out she had been named Senior Citizen of the Year.

“I didn’t think I was that worthy of it,” said Leahy. “I like working with people, and I don’t think you should need recognition for something you enjoy doing.”

When the 88-year-old first found out that she had been nominated, she didn’t think much of it, believing that several people would be nominated, but her daughters got her to go to the Kinsmen Club of Taber’s Heritage Supper on Feb. 22, when she received the coveted title.

“I thought it was usually they nominate three or four people and somebody wins, so I didn’t pay attention when they phoned and told me I’ve been nominated,” said Leahy. “Then my daughters came and said, “No, it was you (who won)”, so I guess I had to go.

Leahy was honoured in from of a crowd of over 200 people, accompanied by a “fancy” family style dinner, featuring the “nicest I’ve ever tasted in all my life” stuffed pork-lion, and a great band playing jiving music.

Leahy is an avid volunteer, having been a member of the Catholic’s Women League for over 60 years, spent several years tutoring adults in the community and used to drive people around to events or appointments if they needed help getting somewhere.

“(I’m) just doing things because I like working with people.”

While she hasn’t done as much volunteering as she used to due to bad knees, Leahy remains active in the community, the CWL and the CNIB.

In the fall of 1979, her daughter, Patcee Leahy Jensen, was shot in an accident and blinded; the two then started the Taber chapter of CNIB, formerly the Canadian National Institute for the Blind, in 1983 with Patcee as president and Leahy as secretary, with 24 people joining almost right away.

“The opportunity came through Lethbridge, to start a group here in Taber, and it’s been very successful ever since,” said Leahy. “It’s not just for blind people, it’s for anybody who has vision problems.”

At the CNIB, they provide help resources to the visual challenged, such as getting people white canes for walking, suppling special magnifiers for reading, teaching how to set up meals so you could find everything and other special gadgets to make life easier.

Leahy learned Braille, spread what was happening in the CNIB meetings around the community and is still active in the organization today. In 2012, Leahy was awarded the Queen Elizabeth II Diamond Jubilee Medal, for all of her hard work and time with the CNIB.

When she is not volunteering, Leahy enjoys making big family dinner for her eight children and grandchilden, with 20-24 attending, and talking to and messaging her family on her Samsung tablet.

“Must of the time I just watch what they’re sending me,” said Leahy. “I did take a course on learning how to use the computer, but its downstairs, and I hate going downstairs, so I let my husband do it.”

Although she does has her suspicions, Leahy is unsure who nominated her for the award, although is very proud and appreciative of receiving the award.

“I am very appreciative of the award from the Kinsmen,” said Leahy.
“I received lots of good wishes from everyone at the event.”