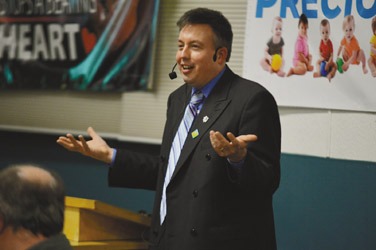 Striking down a prohibition on assisted death in Canada, a recent decision by the Supreme Court of Canada, has the nation considering the prospect of allowing assisted suicide and euthanasia.

Speaking at the Taber Pro-Life Dinner and AGM hosted at the Legion Hall on Feb. 5, Alex Schadenberg, who serves as executive director and international chair of the Euthanasia Prevention Coalition, explored this high-profile issue, while outlining his organization’s moral and legal objections.

On Feb. 6, 2015, the Supreme Court of Canada struck down Canada’s assisted death law and ordered Parliament to frame a new law. Parliament and the federal government currently have until June 6 to draft new legislation.

“We don’t have a bill yet, there’s no law. I don’t know exactly what it’s going to look like,” said Schadenberg, who has headed the EPC since 1999. “The Supreme Court of Canada has said euthanasia, or assisted suicide could be legal based on ‘physical and psychological suffering’. Euthanasia is legal in Belgium and the Netherlands for both physical and psychological suffering. So the example the Supreme Court was using was it’s already occurring in Belgium and the Netherlands for those reasons.”

Euthanasia is an act or omission that is done to directly and intentionally cause the death of another person in order to end suffering.

Assisted suicide is when one person aids or encourages another person to commit suicide.

“Could this happen in Canada in the future? I don’t know. Is it possible at all to define psychological suffering? Can any of us define that?” questioned Schadenberg.

A world leader regarding the issues of assisted suicide and euthanasia, Schadenberg has conducted speaking tours in Australia, Scotland, New Zealand, Switzerland, Belgium, Italy and the United States. The goal of the coalition is to build a well-informed, broadly-based membership of groups and individuals in order to establish an effective social barrier to euthanasia and assisted suicide.

Legalizing euthanasia or assisted suicide would require amendments to the Criminal Code to give one person the right to intentionally cause or be involved with causing the death of another person, under certain circumstances.

“The Supreme Court struck down Section 241(B) of the Criminal Code, that was our assisted suicide act, but they didn’t actually explain how they were going to legalize euthanasia. They left that to Parliament to do, and Quebec has already done it. But in the language of the decision, they explained that euthanasia would also have to be available.”

Schadenburg spent much of the evening detailing numerous examples of euthanasia and assisted suicide in countries like Belgium and the Netherlands, where the procedures are currently legal, and pointing out many situations where these individuals could have considered other options regarding their psychological or physical ailments rather than death.

Canada’s previous assisted suicide legislation didn’t discriminate based on age or physical ailment, according to Schadenberg.

For more information on the Euthanasia Prevention Coalition, visit http://www.epcc.ca.