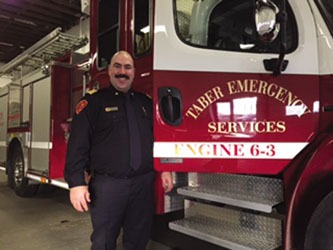 With a decade of fighting fires under his belt Nathan Cote is Taber’s new Deputy Fire Chief.

Cote had started his new position at the Taber Fire Department on Dec. 14, 2015. Previously, he had been the County Fire Chief for the County of Forty Mile.

“As time goes on in our lives, we always want to help out, and give something back to our community,” said Cote. “That was, I guess, the beginning of what really got me interested in becoming a fire fighter.”

In addition to his experience in fire fighting, Cote is a journeyman welder, having received training at Medicine Hat College.

“When I graduated high school back when, I was a pretty good welder, so I endeavoured down the road,” said Cote. “It definitely helps out with some of the maintenance that I look after, it gives you a little bit of experience in repairing and fixing items and stuff, and it definitely helps me to be able to take care of our equipment here.”

Welding was what introduced him to fire fighting in the first place. Cote had been working as a welder for the County of Forty Mile when he began volunteering for the fire department there, and when the position of fire chief came up, he applied and got the job.

During his time at the Forty Mile Fire Department, he got to know Steve Munshaw, Taber’s fire chief, from a committee they sit on together.

“(Munshaw) did a real nice job of promoting the Taber fire department, and I know a few of the members as well,” said Cote. “In looking at what kind of group and what good of a group it was, it kind of inspired me to want to come over this way and be part of that kind of a group.”

So when the position of deputy fire chief became available, he talked to Munshaw about the position, applied and got the job.

The Taber Fire Department is a bigger department then his previous one, and in his new role as the Deputy Director of Emergency Management, he hopes to continue to make a difference.

“I hope I can benefit the community moving forward, and it definitely fulfills my want of this department and a great group of people.”

As Deputy DEM, part of his job is to take care of training the department’s staff and volunteers in what to do in case of major disasters.

“If there was a train derailment, or something of major magnitude for our community, I would help look after the training and stuff for our own staff here in the town.”

Cote’s other responsibilities include taking care and maintaining their equipment and vehicles, coordinating with fire chief Munshaw and the town’s emergency management team and training volunteers.

“I’m absolutely amazed with the wonderful group of people that I work with. The volunteers are extremely dedicated individuals here, that work hard and dedicate a lot of their time and efforts towards the fire department,” said Cote. “I’m just absolutely blown away by the dedication that comes here. It’s fantastic.”

His Tuesday nights are booked into the near future – that’s when the fire department trains together in their new fire training centre, and Cote hopes they will continue to use it for “years to come”. He is looking forward to the railcars being set up, so the department can train with those.

As he has only been on the job for a little over a month, Cote is still learning the ins and outs of the department. After all, it is a new town, co-workers and station, so things are bound to be different.

“It’s a challenge, just learning how the department functions and how things work over here in Taber, and just kind of getting myself up to speed so far.”

When not working, he enjoys fishing, camping, hunting and going to his daughter, stepson and stepdaughter’s sporting events with his wife Marcy.