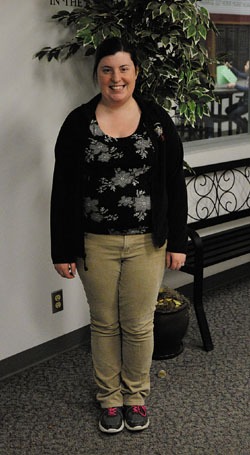 D.A. Ferguson Middle School teacher and young adult author Jenna Greene is hoping her newest novel will drag readers out of their comfortable world and into a new realm filled with magic.

Her latest offering, “Imagine,” is a young adult fantasy featuring two young girls who are transported to a land where they must discover their heritage, learn about their abilities, and try to save the realm.

“They have to figure out where they are, and what’s going on,” said Greene. “They both learn they have different connections to magic on a world called Oren, and they have to help this new magic grow, and make it understandable, and even find two other people that are connected to it.”

“Becky is 10, and she’s a creative little bookworm,” said Greene. “She’s definitely me. A daydreamer, and an idealist. She knows every book known to man and quotes some of them, but sometimes has a little trouble distinguishing what’s fantasy and what is not.”

“Kat is the redhead, so she has a bit of a temper, and she’s a teenager, so she’s a little feisty and cranky.

“And she doesn’t have a lot of self confidence, but it grows throughout the book as she figures out how to do things on her own and has to take care of Becky, who is five years younger than her and she thinks she’s responsible.”

The relationship between the girls grows as they realize they are the only connection to home each other has.

“Kat takes on the protector role for a little bit,” said Greene. “But then, they actually get separated, which is really hard, because their only connection to home is each other. And when they lose that, they become really upset.”

The book is published by High River publisher Champagne Books, and was released this past summer. It is the first in a planned quadrilogy. Greene said the book will appeal to anyone who is a fan of the kind of fantasy that features magic, castles, and elves. But Greene has forged some new paths in the genre, coming up with new creatures, and a magic system readers may never have seen before.

“If you’re not a fantasy reader, it works that way, too,” she said. You don’t have to know any of the traditional backstory (of fantasy).
“There’s no dragons and knights.”

Greene said for her, the stories often begin with characters.

“I saw them in my head and thought, ‘Well, what adventures could these two have?’,” she said.

“I always know the beginning, and the end, but then I just have to figure out the middle, and what’s going to happen there.”

Greene has been a teacher at D.A. Ferguson Middle School for the past nine years. She has been writing since she was a child, however, and recently has found success publishing novels after previously having poems and short stories published.

She writes young adult fiction because she loves to read it, and because she teaches young people (she’s currently a Grade 6 teacher).

“I find a lot of those young adult books have really interesting and challenging themes that you don’t always find in adult books,” she said. “You can be a little bit more creative, because kids buy in. They’ll totally believe it.

“And you can have really profound thoughts in there, but on a level they can understand.”

The fact young people have very creative minds is a source of constant inspiration when it comes to being creative herself.

She added the process of working with an editor at a publishing company has taught her a lot about writing. This has provided her with fodder for teaching her students about the publishing world.

Greene said new writers should expect to be rejected many times before catching the interest of a publisher.

“It’s an industry where they don’t want to publish you until they see you’ve been published, but you can’t get published because you haven’t been published,” she said.

She also hopes people will consider seeking out local writers and other artists in the city.

“Give a new author a try, and support art, artists, and creative people,” she said.

“Imagine” is available online through the publisher’s website (champagnebooks.com) or on Amazon.

Jenna Greene can be reached on Facebook and on Twitter @jgreenwrites. Her first novel, “Heroine,” was written under her maiden name as Jenna Butrenchuk.