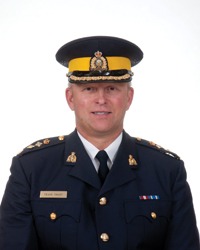 Imagine a line drawn between the towns of Innisfail and Olds.

This line stretches from Saskatchewan to B.C, then all the way down to the U.S. border.

“Everything below (that line), is the responsibility of my district,” said Smart. “My role, as district commander, is operational support for all of our RCMP members in southern Alberta.”

With the help of a ten-member management team – each who looks after a different cluster of detachments – who works alongside detachment commanders and handle the day-to-day operations, Smart is able to coordinate with all 37 detachments in the region.

Smart has been with the RCMP for 27 years, first starting out in Saskatchewan, working in several detachments in different positions – including plain-clothes section in general investigations and proceeds’ of crime – over the course of 15 years.

He moved back to Alberta in 2003, working as the detachment Commander in Valleyview, Alta. In 2007, he became an Inspector in Calgary commercial crime unit, before becoming the district-operations officer for southern Alberta for 2009-12, when he became the Federal Policing officer for Southern Alberta.

“I’ve never been posted out to that (Taber/Vauxhall) area. But I’ve worked as the district operations officer (in southern Alberta) for three years in the past, so I have been out there on various occasions. And I’ve done some work in one of my previous roles, as a federal policing officer, with the Taber municipal police service.”

In 2014, he was transferred to B.C. as the district officer for southeast B.C for about eight months, before moving back to Alberta for his current position.

Smart says the best part of his job is “getting out and meeting” the officers, community members and different councils in the areas that the RCMP serve. As the officer representing the southern Alberta RCMP, community relations are a key component of his job.

“I really look forward to getting out and making relationships.”

As for challenges, it’s the area itself.

Smart is based out of the RCMP headquarters in Airdrie, Alta, and the sheer size of the region he manages makes getting to the furthest office at least a three and a half hour drive on a good day.

“By virtue, the sheer geography and vastness of the district is an area of concern,” said Smart. “Just being able to provide the support that we’re required to give, but keeping in mind the vastness of the area, right? It’s one of our greater challenges.”

While the travel time may be daunting, he is making it a goal to visit each detachment’s area at least twice a year. He has already been in Taber, to speak with Brian Brewin, reeve for the Municipal District of Taber.

He hopes to get out to the Town of Vauxhall in early 2016.