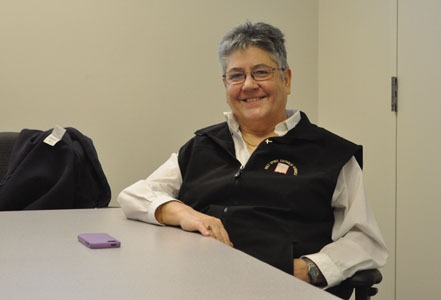 Pat Bremner is a big believer in education.

Having grown up during the 1950’s, when memorizing and exams were the norm, she is amazed at how far the school system has come since then.

It something she plans on continuing as the new vice chair for the Holy Spirit School Division, the Catholic school division for the area, which she was nominated for and accepted last October. Since the chair, Bryan Kranzler, is from an urban area, and her ward, Taber, is a rural area, she wants to make sure that rural areas have a voice too.

“I’m representing the board of course, but I want to make sure that the unique challenges faced by rural schools are at the forefront of the board’s agenda,” said Bremner.“And it’s traditional that there’s either a rural chair or vice chair, and the opposite is an urban.”

Bremner had originally got involved with Holy Spirit when she first ran as a trustee three years ago, winning her ward’s seat by acclamation.

Her new role will place her into a position of governance, rather then running the division. As vice-chair, she will be in charge of the division’s financials and ensuring that the board understands the financial and audit statements, along with advocating for both education and Catholic education and working alongside the superintendent, to respond to needs that arise in the schools.

“At the end of the day my decision to run for the board period, and then for vice-chair, is based on a love for learning, and a strong desire to see education flourish in our province. This role will enable me to learn more, and to be able to help find ways to improve life in the classroom. The previous vice-char was doing a fabulous job, and I simply just want to continue in the same direction he was going.”

She is looking forward to the modernization of St. Patrick, one of the three Catholic schools in her ward, which is getting it’s first much needed update since the 70s. Alberta’s minister of education David Eggen, assured the board that they be able to go ahead with the project, something that Bremner had lobbied for.

“We have been trying for many years to get modernization for (St. Patrick), because it’s an old school, and we want it brought into the current age, because learning and learning environments have changed a great deal over the century, over the half century, even over the quarter century,” said Bremner. “We finally got the okay. So I want to be part of that process, to see the new school come in and how it effects and how it enhances 21st (century) learning for our kids here.”

Currently, St. Patrick is composed of a hallway with rooms to each side and a library at the end.

The gymnasium has problems with insulation, there is no place to gather and there is no break out room, for when a child has troubles learning and needs help from an educational assistant.

“Understanding on how children learn and what is best for a learning environment has evolved long past that hall with classrooms on each side.”

While there is no set date as to when the modernization can begin, since the NDP government has inherited a lot of promises from the previous government and several projects had to be put on hold. However, Eggen has promised Holy Spirit that St. Patrick will be able to go ahead with its modernization.

In addition, St. Michael’s in Pincher Creek is currently undergoing modernization, and the division will get a new elementary school in the Legacy district in Lethbridge.

“I’m eager to see the schools survive. In many other school divisions, rural schools’ population is declining. In Holy Spirit, it’s either stable or rising, and I want that trend to continue,” said Bremner.“Our division is growing, and children are coming into our schools. I find that exciting, and I want to continue to be part of it.”

She cites people moving into southern Alberta, as well as the division offering attractive programs, teachers trying new things, innovated and good education and the spiritual and moral component that is the core of the school, even if the students and families are not Catholic themselves.

“We don’t brainwash, we model what Catholicism is, through how we negotiate the day-to-day difficulties,” said Bremner. “Catholicism is part and parcel, it’s at the centre of what we do. Even though we do hardcore sciences and math and everything else that the public schools do. It’s just different that we have Christ at the centre.”

Some of Bremner’s goals for this term as vice-chair include cultivating a good working relationship with Eggen and Cardston-Taber-Warner MLA Grant Hunter, lobbying for money to meet needs for diversity and closing the achievement gap between First Nation and Métis students.

Brenner will be vice-chair until next October, when the division will nominate and vote on chairs. If elected again, she will serve for another year, at which point the entire board will come up for public re-election.