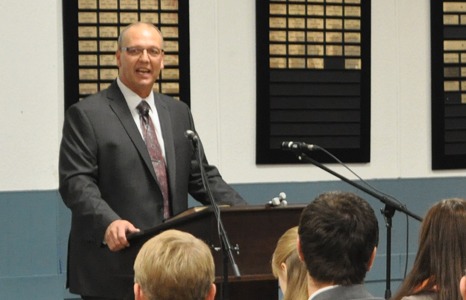 There is a new church in town for Taber and the surrounding area.

“Being from a Baptist church, and there not being any Baptist churches in Taber, the people have a tendency to be a little hesitant, not knowing what our beliefs and teachings are,” said Brad Friesen, pastor for the Calvary Baptist Church in Taber. “When in actuality, we are simply teaching and preaching the word of God.”

The Taber church will be the first congregation that Pastor Brad Friesen will preside over. He was a construction worker before he took up the call that the Lord “laid on his heart” to become a pastor in 2010, and just graduated from the Canadian Baptist Bible College with a bachelor of theology this spring.

“This is just another part of what the Bible calls a ‘great commission’, where we are to go out and spread the gospel to every part of the world,” said Friesen. “After my home pastor felt that there was a need to plant a church here, it was mentioned in church, in some of our meetings, that this was something he was burdened about, the church was burdened about. And one thing led to another, and the Lord just laid it on my heart to come to this area.”

Friesen then made the commitment to be the pastor for the church in Taber in May of 2014, before he had even been to Taber.

“I didn’t have to see the area before I came, because I knew he wanted me to be here. Sometimes its a little hard to explain; when one surrenders yourself to the Lord’s leading, it just seems like there is a confirmation that he gives you, in your spirit, that you just know that’s where he wants you to go.”

While he is a new Taberite, he is of Mennonite descent and speaks Low German.

He first visited the town in September 2014. He found that it was similar to Winkler because of the business and industry in the area. Although while Winkler may have a larger population, Taber gets more traffic.

“It felt like a duplicate of the Winkler area,” he said with a chuckle. “Although Taber had a little more diversity with business and so on.”

Friesen moved to Taber with his wife Lisa and daughter Charity in August 2015. Eric Neufeld, who will be serving as a second man or assistant pastor, also made the move then with his family.

“The people are absolutely amazing, and the people are very easy to talk to, in Taber, and really all of southern Alberta has been that way… People are really considerate, very polite, something we’re not always used to in today’s world.”

Evangelist meetings were held a month prior to service, to introduce the church and its teaching to attendees.

“It gives people a bit of a taste, of what is to come, so we try to have these meetings a few weeks prior. It just kind of gets the word out.”

To help out, there were also 29 volunteers from the church in Winkler that made the trip out to Taber this month, in order to help raise awareness and put together the initial service.

“Even though we are sent out from Winkler, we are still an independent, fundamental Baptist church,” said Friesen. “Once this local church is autonomous or self supporting, then the ties are cut between the two churches, and Calvary Baptist Church becomes independent.”

The first service was held on Nov. 22 at the Legion Hall, with 127 people attending, including the crowd from Winkler, Man. From now on, service will be held in the White Room at the Community Centre.

“We have a place in the White Room that we can use until we either outgrow it, or see a need to find a better facility.”

In the future, Friesen hopes to add Sunday school and a Wednesday night children’s ministries. He also would like to help start up other churches in southern Alberta.