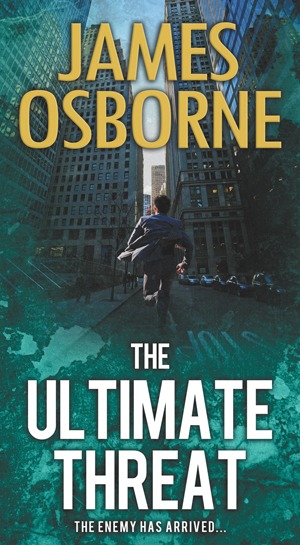 James Osborne’s debut novel The Ultimate Threat might take on international terror groups in a taut thriller, but Osborne has his roots here at home in southern Alberta soil.

Osborne was raised in Taber and got his start at the Taber Times working in the advertising department. He was also able to write the occasional story for the paper, which sparked an interest in journalism.

Opportunity eventually saw Osborne moving on to writing for the Lethbridge Herald, first as a general assignment reporter and later as the Agriculture Editor, a position Osborne said he was given after a poll was taken to see if anyone had ever lived on a farm.

“I put up my hand, and I was the only one in the newsroom,” he said.

Osborne spent four years at the Herald before moving on to the now-defunct Ottawa Journal. He spent time as a senior editor at the Canadian Press, taught journalism at Grant MacEwan University as the first instructor and director of the school, and then moved on into public relations. He was vice president, public relations, at both SaskTel and Bell Canada before going into business for himself.

“Most of my working career was in PR,” he said.

Osborne currently lives in Vernon, B.C., and has been retired for the past 10 years.

Back in the spring, Osborne’s novel The Ultimate Threat was released. Since that time, he has also released a collection of short stories and is getting set to publish his second novel, a murder mystery titled The Maidstone Conspiracy.

In The Ultimate Threat, ex-Navy SEAL Mark Sanchez is fighting against organized crime in his new job with the FBI when his family is attacked by members of ISIS, who have infiltrated the mafia and see Mark as being in the way. Mark must somehow figure out a way to rescue his family while saving America from a growing terrorist threat.

It is a taut action thriller that has garnered a lot of positive reviews on places such as Amazon.com.

Reviewers say it’s a story torn from the pages of tomorrow’s headlines, and is a story that Osborne felt is an important one to tell.

“ISIS does pose a very serious threat to innocent people in the western world,” he said. “They are without principles, and they have already shown how dangerous they can be with the wanton killing of innocent people.”

Osborne said the more research he did on the organization, the more compelled he felt to writing something that would tell a story of the threat to the west. He was encouraged to finish the novel by friends who looked at early outlines and saw potential in the story he was developing.

Osborne said another serious issue with ISIS is how they are misrepresenting their faith.

“These people claim to be Muslims,” he said. “And they are not at all. They could just as easily claim themselves to be Christians, or Jews. What they are doing reflects very negatively on a religion that is all about peace.”

“We can talk about the Bible as being about peace, but that goes for the Muslim faith as well.”

“The Muslim faith is not what it is portrayed to be, either by (ISIS) or by the media. There are more calls to peace in the Quran than there is in the Bible. And there is more violence in the Bible, than in the Quran.”

The Ultimate Threat, as well as Osbornes’ other books, are available at all major online retailers. for more information on James Osborne, please visit his website jamesosbornenovels.com.