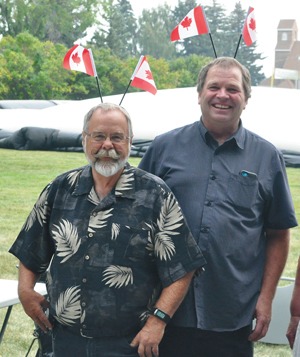 Calling for a Liberal majority government almost as quickly as Alberta did for its NDP majority as initial polls closed, it looks like among voters, Justin Trudeau was indeed ready despite Conservative advertising to the contrary.

Triumphing in the Bow River riding with a landslide win, Conservative candidate Martin Shields took 77.4 per cent of the vote in the newly-minted riding.

“Being elected MP, very grateful to the people that voted for me,” said Shields. “It’s a big riding. We’re in a party system, and I know that’s a challenge, but my belief is you work, one, for the constituency, and two, you work with the others that are elected to get things done. So I’ll continue to do that.”

On the national stage, the Liberal Party secured 184 seats (54.4 per cent) for a majority, with the incumbent Conservative Party only taking 99 seats (29.3 per cent, as well as signaling former Prime Minister Stephen Harper’s exit from the party leadership) to form the official opposition. The NDP brought up the rear with a respectable 44 seats (13 per cent), while the Bloc Quebecois had a minor resurgence in securing 10 seats (three per cent), but not enough for official party status. Total eligible voter turnout across the nation posted some surprising numbers, with 68.49 per cent casting a ballot, reminiscent of mid-20th century voting figures in Canada.

Shields’ win will precipitate a by-election in the City of Brooks, as the long-time mayor will be stepping down to take on his new duties in Ottawa.

Serving on the opposition side of the House will be a challenge for the new MP, while Shields admitted there is likely to be some soul-searching in the ranks of the Conservative Party in the wake of a Liberal majority.

“There’ll be a lot of second guessing of campaigns and change,” said Shields. “For me and the people here, they though that what we had going, what was working was a good thing, so they didn’t see that value in change. We did here — I think there was a party that lost considerably this time, and I think people changed their minds, and that made a huge difference.”

While Bow River MP Liberal Candidate William Alexander finished a distant second to Conservative Party of Canada’s Martin Shields, his numbers were impressive nevertheless given the stronghold Conservatives have had historically in rural southern Alberta.

“This was the collective voice of the nation to really saying we are looking for change and the party that was going to bring the real change we wanted to see was the Liberal party,” said Alexander. “Obviously not in our riding, and good for Martin, he’s a really good guy. But, it’s a pretty big message that I brought in about (13.7) per cent of the vote and traditionally the highest the party has seen in the last four or five elections is around six per cent. It is a signal we were looking for change.”

As Alexander knocked on doors and participated in the Taber debate forum earlier this month, he met an electorate that was at least willing to listen, if not vote for the liberals in the Bow River riding.

“I would be lying if I said it wasn’t an intimidating thing to do and it takes a lot out of you. I surely enjoyed it. I know a lot of people when I said I was running in a particular rural and quite conservative riding, they though tit was an interesting move,” said Alexander. “But the reception that I received was very positive. A lot of people probably might not agree with me or be willing to vote for the Liberal party, but they were very willing to have a good and respectful conversation with me after forums and when I was calling constituents and door knocking.”

Switching to the role of political scientist in which Alexander is currently in his final year of at the University of Calgary studying for, Alexander credited Liberal party leader Justin Trudeau’s victory to his approachability no matter the region of the country for policy.

“For me personally, among the three major party leaders, he was most willing to listen to the constituents no matter where he was in the country, be it Alberta, Quebec, B.C. or Ontario. He was willing to sit down and listen and say this isn’t going to be a top-down government, this is going to be bottom up,” said Alexander. “We are going to listen to what people need in their ridings and in their communities and work with those communities to get those things done. He was also willing to say this isn’t going to be an easy journey. We are going to be a party that is gong to invest in Canada and if that means temporary deficits then we are willing to run those and bet on Canadians that we are going ot come out stronger than ever before. I think that resonated with a lot of people, at least in my opinion.”

Bringing up a remote third with with 5.2 per cent of the popular vote in Bow River, the NDP’s Lynn MacWilliam was gracious in defeat.

“I knew a lot of these people in Ottawa, so it’s going to be sad to see them and their staff go. But that’s politics, right? As far as myself, I put up a good fight. I would have liked to have done better. Martin (Shields, CPC candidate) is very popular, and he always has been, and it’s a very conservative riding.”

The evening’s big winner was obviously Martin Shields for the Conservative Party of Canada, taking in a whopping 77.4 per cent of the popular vote to take the riding.