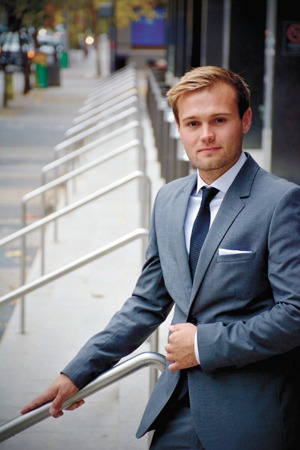 Although tardy out of the gate in securing a federal election candidate for the Bow River riding, the Liberal Party of Canada’s William Alexander has pledged to make the most of the final month of the campaign.

“The current Harper government, I feel, has let Canada down,” said Alexander. “They have fostered a very partisan and polarizing political discourse that has made it increasingly hard for balanced and fair policy to be made. This polarization has also made political dialogue quite harsh and has had the effect of making everyday Canadians disengage from the political process.”

A fourth-year political science student at the University of Calgary, Alexander currently resides in that community.

“I feel that Canada has lost its way in recent years, and my grandfather always said that you have to be the change you want to see in the world,” said Alexander.

Key issues for the country and the riding in Alexander’s estimation include job creation, sustainability, infrastructure investment, and accountability.

“I know first hand the challenge of finding fulfilling and sustainable employment in today’s economy — especially for young people. A Liberal government will invest in young Canadians entering the workforce, helping them acquire the skills and experience needed to make meaningful and sustainable contributions to the local economy.”

Focus on increased environmental controls and sustainable development of resources will be highlights of a Liberal government, according to Alexander.

Alexander would also push for vital infrastructure improvements that are integral to the export of the nation’s resources and products.

“I know that for Canada to remain competitive in global markets and for domestic markets to grow, critical infrastructure must be in place and it must be maintained. This encompasses all types of infrastructure from roads and bridges, to public transit, greening Canada’s electrical grid, and increasing access to the Internet and telecommunications. These investments will create jobs and grow Canada’s economy.”

Combatting corruption and fiscal impropriety in government is high on Alexander’s list of issues to be confronted by a Liberal government.

“I believe in and am committed to delivering the following fundamentals of a properly functioning democracy: transparency, representation, and accountability in government. The party is committed to Western Canada and Alberta and knows that in order to have a prosperous Canada we must have a prosperous Alberta. Working to gain Alberta market access for our resources is a key goal of the Liberal party.”

The Liberal candidate hopes to reach as many areas of the riding as possible during the final weeks of the campaign.

“I expect to be in a variety of areas in the riding, Chestermere, Strathmore, Langdon, Acme, Brooks, Taber, Vulcan, and everywhere in between. My personal platform and the party’s dovetail together, which is why I feel that the Liberal party is the best choice for Bow River,” said Alexander. “All Canadians want to be able to live in a safe, prosperous, and caring nation; and I feel that no matter where someone lives the basic pillars that make up Canadian society have no divisions.”

The winds of change that have impacted provincial fortunes in 2015 may have an impact on federal outcomes, predicts Alexander.

“I feel that the provincial results have shown that Albertans are ready and willing to make changes in governmental direction when we feel taken for granted or overlooked.”

Taking a swipe at the current Conservative government, Alexander suggested Canadians are fed up with Stephen Harper’s “failed economy”.

“My message is that I know the challenges and frustrations that many Albertans have experienced under Stephen Harper’s failed economy. I am committed to listening to and providing a strong voice for Southern Albertans in Ottawa.”

The campaign for Bow River currently features four other candidates, including Martin Shields for the CPC, Lynn MacWilliam for the NDP, Frans VandeStroet for the Christian Heritage Party of Canada, and Fahed Khalid for the Democratic Advancement Party of Canada.