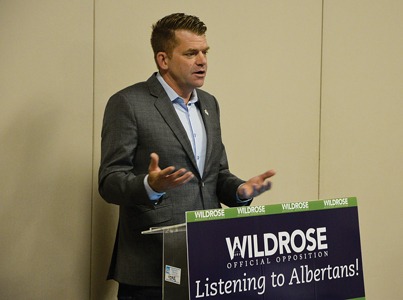 “The uncertainty that they’re sending to the marketplace is the biggest issue, with the royalty reviews, the GHG emissions reviews, every other thing that they’re putting forward — it sends uncertainty in the marketplace,” said Jean, interviewed following a luncheon at the Heritage Inn in Taber last week. “Investors are not going to invest here, and this is a marketplace where we depend on private equity investment in order to have jobs here. Let’s not be under any misunderstanding — the oil and gas sector plays a very significant role in Alberta. It is responsible for the wealth, for the great schools and education system we have, and right now it needs our support, and we should be there to support it, not punish it.”

Jean went on to attack fiscal hardships being faced by the industry which he attributed to the Notley government.

“And how you punish it is you increase their taxes by 20 per cent, and you bring in regulatory changes to a marketplace that has been certain for 20 to 30 years, as far as GHG emissions. They’ve seen the steady increases and they know what the demands are, and that’s why they’ve moved that way, but they’ve done it in a predictable, long-term way. The signals we’re receiving now is that it’s going to be 300 per cent different than what it is currently, which means it’s going to have a very significant role. But the biggest issue is, nobody knows.”

The luncheon in Taber last week was part of a summer tour schedule for the official opposition leader, with Jean addressing major issues facing the province with local municipal representatives and other dignitaries, including business leaders.

“I’ve been travelling, right across the province. I’m doing five to seven communities a day, meeting with groups like this,” said Jean. “My MLAs — the Wildrose MLAs right across the province — are gearing up and trying to organize things for me so I can go from 8 a.m. to 9 p.m. and meet a lot of people. It’s really all about listening, though, not about talking. Right now, it’s all about listening and making sure we carry the priorities of Albertans to the legislature. This is all about developing strategy and making sure that each and every summer we have a month that I and my team travel around the province and listen to Albertans to decide what their priorities are so we can fight for those priorities.”

Plunging economic indicators as well as the grassroots impact of an economic downturn has been largely influencing what the Wildrose leader has been hearing from everyday Albertans.

“Economy and jobs, oil and gas — I’ve heard linear taxation here, but I would say 60 to 70 per cent of the people that I talk to, it’s all about the economy and jobs. In fact, I talked to somebody who manages a hotel and he said they’re usually between 40 and 60 per cent, and they’re down to 12 per cent right now, and they have been since the Notley government came in. That tells you a lot — that’s a local hotelier,” said Jean.

Seasonal impacts, such as drought issues being faced in areas of the province in 2015, need to be looked at through the lens of long-term solutions, according to Jean, who went on to hint at increased off-stream storage for irrigation producers as a potential solution to flood-related problems in some areas.

“We’ve had some of the best years we’ve ever had in the cattle industry and the agriculture industry over the last 10 years. It’s very difficult to interfere in a marketplace that’s had such great results, but there are some areas of the province that been devastated, for instance northeast Alberta. Right now, we do not have any policy of subsidization on drought issues, and frankly, I don’t think we should. It’s not something that we can do on a producer-by-producer basis. What we need to do is look at the drought issue itself in southern Alberta, and we have to come up with a plan to alleviate both the flood issue and the drought issue, which seems to be an opportunity to create some solution to the drought issue, to be blunt. I don’t know what that is, but I think if we rely on scientists to determine how we can do that, there’s an opportunity to do that. When you have floods, and you have drought, there’s a common variable there, and it’s called water.”

Some previous and current practices in relation to water use and conservation — especially by industry — need to be further addressed, added Jean.

“I don’t know what the answer is, but it seems to appear to me that — seven years ago when I was in the federal government as a Member of Parliament, I made a public statement telling people I thought it was crazy they were pumping fresh water down into the earth to get out oil and gas. I’ve maintained that for the last seven years, and it appears I was correct on that. All I would suggest is that some of the things we’ve done in the past have not been the smartest things, and that was one of them.”

Jean’s appraisal of the CPC’s Stephen Harper as Canadians prepare themselves to go to the polls in October was a laudatory assessment that painted the Conservative leader in glowing terms.

“If I get a chance, I’m going to vote for Stephen Harper. I think he’s the best prime minister we’ve ever had in Canada. I think he’s an excellent money manager, and although some Canadians don’t believe in everything he does and everything he stands for, the truth is at a time when we have global economic uncertainty, I think it’s time for a steady hand at the tiller, and I think that hand is Stephen Harper. I saw him first hand, he didn’t do me any favours, and he’s never going to, because he’s not that kind of guy — he doesn’t do favours. He’s just a very good manager, and he’s the person I’m going to vote for, and I think every Canadian should.”