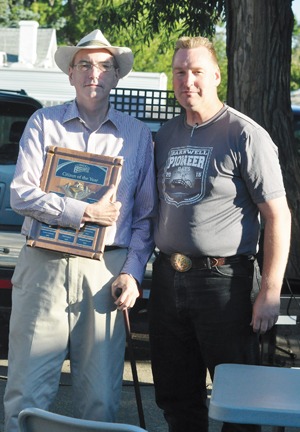 Local tree enthusiast and horticulturalist Marquis Johnson has been honoured as the Barnwell Citizen of the Year for 2015.

“It was really a surprise to me, and I’m quite honoured. I really didn’t feel like I’d done a huge amount,” said Johnson. “I guess over the years my tree planting, which was what mainly stimulated this award, has caught people’s eyes.”

Johnson served on Barnwell village council from 1980-1983, which was when his passion for community planting reached full fruition.

“I was assigned to sort of guide, and be the point man, on developing Heritage Park. Myself and others, we had the park designed, and the idea behind the park was to have a number of different trees in it that would be interesting to people, so people could see trees that could be grown here — because after all we’re living in a part of the world that had sage brush on it prior to being plowed.”

Since the development of the park, Johnson has annually been adding interesting tree specimens, both deciduous and coniferous.

“After that, every spring I would plant a tree over there that I thought was unusual, or I knew could grow here, and that you didn’t see very many of them around. So I’ve been continuing to do that up to this year. This year I planted a Pin Oak, and a larch, and a Morden Yew, which is kind of a tree bush.”

Heritage Park isn’t the only site in the community that the 61-year-old Barnwellian has been actively planting on in the past.

“It’s been my hobby to plant seeds that I’ve gathered from various places, and started trees from seed. On various places where I’ve lived in Barnwell, we’ve planted various kinds of trees around. We’ve actually planted a lot of elm trees that we grew from seed, and a lot of pine trees.”

Johnson was born and raised in Barnwell, and except for two stints in Calgary for post-secondary education, has been a resident throughout his life, permanently for the past 15 years after being forced to retire from a career in the oil industry due to illness. Johnson is also an avid reader and book collector.

Johnson lamented a row of trees that had been removed from the community in the past, and explained his love of trees has been a life-long passion.

“I always loved those trees, because they stopped the wind, and our west winds can be pretty bad some times. Barnwell wasn’t nearly so big then as it is now, and we were living right out in the open. If anything motivated me to love trees, it was the west wind — doing something to stop the west wind from blowing so hard. It was a motivation to me as a child.”

Touching on one of the reasons for the creation of the park, Johnson encouraged individuals interested in seeing what kinds of interesting specimens be grown in their own yards to come out and have a look.

“Everybody is welcome to come out to the Barnwell Heritage Park. That’s where the trees are. They can get a chance to see what a Burr Oak looks like when it gets 30 years old, or a little-leaf linden at that age, or a basswood, which is our native linden. You can see in this park just what that tree looks like, to get some ideas for your own property. Those trees are always available at the better nurseries. If anything, that’s what I’d like to see.”