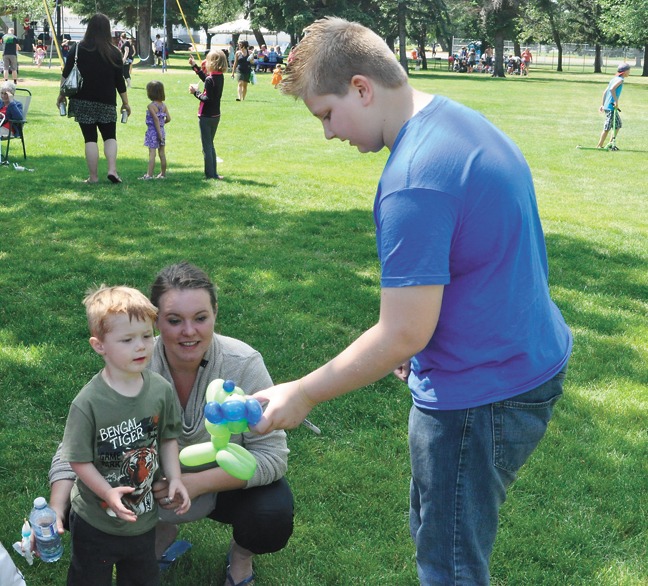 Local magician Ben Dorohoy pulled a big win out of his hat at a recent magicians’ convention and competition in Calgary.

Dorohoy, a W.R. Myers student who will be in Grade 10 in the fall, placed first among 16 other youth competitors for his act. This year marked the first year Dorohoy attended the event, and the first time he has competed in the Mega Magic Saturday, Youth Stage Magic Competition. The event took place on June 27 at The Vanishing Rabbit Magic Shop.

“There were quite a few magicians,” said Ben, who estimated there were more than 100 magicians at the event. “I’d never met that many.”

Following  the competition, Ben was invited to perform his act in front of a large crowd as part of the evening’s festivities. It was an opportunity for him to share the stage with established professionals in the field.

Duke said he estimated as many as 250 people took in the evening show, a number that came as a surprise to Ben.

“Good thing you didn’t tell me that before,” Ben quipped. He said he was nervous performing in front of so many people, but he became more calm as the evening progressed.

He said he had no idea who the judges were when he took the stage.

“We weren’t supposed to know who the judges were,” he said. “It was supposed to be anonymous.” He added the judges turned out to be professional magicians in their own right, and scored the performers on a number of criteria.

While he is still waiting on the score sheets to be mailed to him, Ben said he heard a lot of positive feedback directly following his performance.

“People told me they thought it was a good routine,” said Ben.

“They said everything flowed together, and they thought it was funny.”

Ben said he felt he had done well when he wrapped up his performance, but did not want to seem overconfident.

“When they said my name, I was pretty surprised,” he said.

Ben was in the stage category, and scored the highest points overall for the youth portion of the competition.

Ben’s interest in magic began when he was 12, and spent the summer learning magic tricks. He said when he went to school in the fall, however, those tricks were soon forgotten as he got busy with school and other activities.

Ben said he began by learning tricks on the Internet, but as time progressed he has started reading magic books and watching DVDs. He also attended a magic camp in Calgary last year; the camp was comprised of five days of intensive magic training culminating in an evening show where the young magicians can show off what they have learned.

“You learn a lot different things,” he said. “You learn card tricks, non-card tricks, balloon animals, coin tricks, and stage magic such as levitation and sleight-of-hand.”

Ben said some of his favourite things about magic include peoples’ reactions to his tricks.

“They laugh, and they have fun,” he said. “I like entertaining people. I like it when people are happy, and I can make them happy through magic.”

Another reason magic continues to hold Ben’s interest is the novelty of it.

Ben said a lot of preparation time can go in to designing a routine. For the Mega Magic Saturday competition, he spent weeks refining his act until he had it just the way he wanted it. The routine had to be between four and six minutes, and competitors performing outside those times risked having points deducted from their final scores.

Ben said in spite of winning with a stage presentation, he is more of a fan of close-up magic.

He would like to continue with magic when he is all done with high school and off to university.

“I could just do shows and stuff while I am going to university,” he said, adding it could help him pay his way through school.

Duke said Ben’s nieces and nephews consider themselves very lucky, as they can sit and watch Ben do tricks for hours. Ben said his nephew in particular will often pick up a deck of cards and try to emulate his uncle.

Recently, Ben was a big hit during Canada Day festivities in Taber, as children continued to line up for his balloon animals until long after the festivities had concluded.

“Eventually, we realized it was just random kids wandering through the park,” Duke said. “People were just going for a walk and realized he was tying balloons. The organizers finally sat at the back of the line and said, ‘no more!’”

“I have a really hard time saying no to kids,” Ben said.

Duke said he was surprised when his son took up magic, but knew his interests would eventually lead him to something creative and unique.

“He’s always been creative and a little bit different,” he said. “In that aspect, I am not surprised he has picked up magic. But it’s been really neat watching his personality and his confidence develop as he does this more and more. We go to restaurants now, and he’ll just walk up to people and ask if they want to see a magic trick. The waiters and waitresses especially love him.”

For more information or for booking information, please contact Ben Dorohoy at bdorohoy@gmail.com.