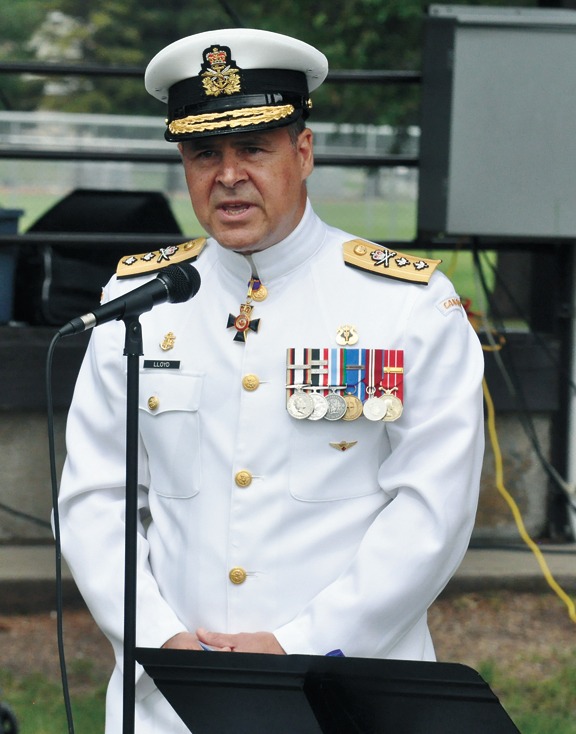 None other than former Taberite and current Deputy Commander of the Royal Canadian Navy, Rear-Admiral Ron Lloyd.

The highest ranking military man from Taber in modern history, Lloyd’s call to service came at an early age.

“When you take a look at what my mom has done in terms of service, helping out in the community, and what my dad is doing to even this day with service, from my perspective I started with cadets,” said Lloyd in a sit-down interview with The Taber Times at The Legion, just prior to a formal dinner, celebrating the 70th anniversary of the liberation of the Netherlands during World War II and freedom in general.

“It showed me what service was about through the eyes of a cadet and in turn it just made a whole lot of sense to join the military.”

Taking in the Taber Canada Day celebrations, Lloyd beamed with pride when he saw the local cadet squadron take part in the military parade, seeing the next generation of youth in the worth-while program.

“From my perspective, it is probably one of the best organizations and programs in the country. To have the opportunity for young men and women to join this organization and get the leadership training, skills, and development and discipline in order to come out as great leaders,” said Lloyd.

“And not just leaders in the military. Leaders in the community who can make a difference is really powerful. It’s a program that is head and shoulders above anything I’ve seen and there’s great opportunities that can come from it.”

A W.R. Myers Wall of Fame recipient for his distinguished military service, Lloyd grew up next to ‘Grampa’ Billy Williams which the Taber Legion Hall is named after in which his picture is front and centre for his military service.

“I related growing up next to him. Growing up, I don’t think you really understand sacrifice and service to one’s country, but on the other side of 34 years in the Canadian Armed Forces, you have a much greater sense.”

Deputy Commander Lloyd’s military service has taken him all over the world and has taken up residence all across the country.

But it is southern Alberta that grew the roots into the man he is today.

“The values you get from growing up in southern Alberta, I say you are a product of your environment. It takes a village to raise a child and so the values and ethics of that community make you the person you are today. Whether it’s the military or the private sector, southern Alberta is represented quite well,” said Lloyd. “You are proud of where you come from. Having lived in Halifax, Toronto and Ottawa and Victoria, Canada is diverse and we are much more stronger for it, but it’s great to come back home.”

In 1993, Lloyd attended the Operations Room Officer course and subsequently joined HMCS Calgary (FFH 335) as the Combat Officer where he was promoted to Lieutenant Commander. In Calgary he participated in Operation Tranquility, which consisted of enforcing United Nations sanctions against Iraq in the Persian Gulf and enforcing a United Nations embargo against the Former Yugoslavia in the Adriatic.

In 1996, he assumed the position of Combat Officer Sea Training Pacific. His next appointment was as the Executive Officer in HMCS Ottawa that deployed as an integral member of the USS Abraham Lincoln (CVN 72) Carrier Battle Group on Operation Mercator, in the Persian Gulf in support of United Nation’s operations.

He then returned ashore to attend the Canadian Forces Command and Staff College in Toronto. In 2000, he was promoted to Commander and on being transferred to Maritime Forces Atlantic was appointed as Commanding Officer of HMCS Charlottetown (FFH 339) at Halifax, N.S. In Charlottetown he deployed as an integral member of the USS Harry S. Truman (CVN-75) Carrier Battle Group on Operation Augmentation 2001 that also deployed to the Persian Gulf.

After a three-month reprieve in Halifax, Charlottetown returned to the Persian Gulf in support of Operation Apollo, Canada’s commitment to the War on Terrorism. In 2002, he served as the Executive Secretary to the Chief of Maritime Staff and the following year he completed his MA and French language Training and was promoted to Captain. He served as Commanding Officer HMCS from September 2004.

In 2006, he was appointed Director General Maritime Force Development at National Defence Headquarters in Ottawa. Upon completing the National Security Studies Program in 2008 he was promoted to Commodore and appointed as the Commander Canadian Fleet Atlantic. He was appointed as Commander Canadian Fleet Pacific in March 2009. In July 2010 he was promoted to his current rank and appointed Chief of Force Development.

Being at the head table of the celebratory dinner at the Legion for the Netherlands 70th anniversary in its liberation during WW II, Lloyd knows full well, not only how the Dutch community views Canada during those dark days, but how Canada has a favourable view today internationally.

“In my travels, one thing I can say is we have a great country. The peace and prosperity we enjoy shouldn’t be taken for granted,” said Lloyd. “In the Navy, you get to see other aspects of the world. You see the darker sides of critical situations. We should all be extraordinarily proud of the opportunities we have here in the country. When you see any veteran, you are extremely humbled by what they did for our country.”

Be it monetary, political, religious or ethnic in the lack of peace across the world Lloyd has seen in his military travels, it always brings his heart back close to home in being a proud Canadian.

“All you have to do is watch the news. You take a look at what’s going on around the world and we have forces deployed all over the world. Whether it’s humanitarian or disaster relief or forces on the front line, Canadians are making a difference,” said Lloyd. “We have a ship right now on the Mediterranean making a difference. We routinely send ships to the Caribbean to make sure drugs don’t get into Canada.”