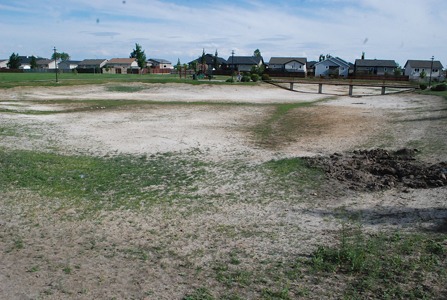 The Town of Taber’s odyssey of woe continues with regard to the old rodeo grounds dry pond facility located in Taber’s northwest end, with area residents recently expressing renewed frustration at the lack of progress towards a permanent solution.

The area, which includes a dry pond and a park, has been a perennial problem for the Town of Taber with the pond, grass areas, shrub, flower and wood-chip plant beds and rock-flanking concrete paths posing difficulties for the town in terms of maintenance since 2012.

Complaints from residents have focused on the aesthetically-displeasing and unsightly aspects of the dry pond facility which has seen weeds and other issues combine to create a continuous headache for the town in terms of maintenance.

At their May 25 meeting, town council received a signed petition from residents of the area which collected 38 signatures requesting the Town of Taber actively rectify the situation.

“The mayor knows it is an engineered dry pond and the mayor knows how to fix it. He built it,” states the written petition. “There are homes for sale and it is negatively affecting the value of their properties. We also realize that there have been attempts at fixing the park, but unfortunately it hasn’t been fixed properly.”

Opening council discussion on the petition, Mayor Henk De Vlieger expressed interest in seeing the issue “go away” in the future.

“It’s been an ongoing concern for a lot of years, and it seems like it’s still not improving from what was done last fall. It hasn’t seemed to have totally caught on, and people have their concerns, I guess. I’d like to see it go away sooner than later.”

CAO Greg Birch pointed out problems regarding the facility had seen public egg on the face of the town more than three years ago.

“Before I came here in 2012, I was looking in the newspapers to see what the hot issues were, and this was it.”

According to administration, in the fall of 2014 the Town of Taber contracted a landscaping company to rototill the dry pond, add additional topsoil, spray a hydroseed mix and check irrigation lines, at a cost of roughly $19,000.

As more seasonable weather progresses, increasing alkali issues have arisen which will need to be dealt with, as well as damaged irrigation lines.

“We don’t know why that’s happened,” said Birch. “Alkalinity doesn’t just come and go — there’s something wrong that’s generated this. We have a situation where a lot of the irrigation lines that were there have been damaged, due to the work that occured last fall. These are not frost-related breaks, but somehow they got damaged during the work that was being done. We’re perplexed as to what we really should do. This is not an easy fix that we can see right now.”

Recreation supervisor Trent Smith commented on the growing alkalinity issues in the dry pond, and detailed various methods of dealing with the problem.

“It seems like the white alkali is getting more and more as the days go on. It started out it was pretty brown two weeks ago, and now we’re looking at high alkalinity in certain areas there. There is green grass catching and showing in the wet areas and the sides.”

“What is the contracter obligations that did the remedial work there? Is there not some onus on him to repair the damage that he caused?”

Holmen suggested liability for irrigation damages would be difficult to determine without concrete evidence.

“At this point we’re not 100 per cent sure the damage was caused by that contractor. It’s a possibility, but there actually isn’t any proof.”

Strojwas suggested the previous contracter should be made to deal with the situation regarding damaged irrigation lines.

“Well, the lines were chopped up and they were the only ones that were in there with a rototiller, so obviously that’s part and partial of the problem. We just went through a subdivision hearing and making sure that contractors post bonds and are good for the work, we have the same situation right here, so why are we not going back to the contracter and demanding he fix the problem? Why are we letting him make it our problem? He got the money for it — good money. I still feel you have to hold the contracter liable for a portion of this. We can say all we want, and the town may be have done whatever, but they were in there doing the remedial work — all of this should have come forth. When the lines were blown out, obviously it would have shown that there were breaks in the lines.”

Coun. Randy Sparks noted that previous solutions have been failures, and that the town needs to dispense with stop-gap efforts.

“This has been an issue that has been ongoing for a long time, and it needs to be dealt with. Council of the day put some money aside for grass and sod to be laid in there — that was done and didn’t work. They’ve tried the spray thatching and it didn’t work. There’s issues there with that soil that are going to go on forever.”

Sparks went on to suggest just what the facility is meant to be needs to be determined in future before more decisions are made by the town.

“The issue back in 2012 is what actually is this thing? Is it actually part of the park? Does it have to be manicured and looked after like the park? When you look out there, is the sun supposed to settle over it all the time? Or is it a dry pond? It’s not a retention pond, it’s a detention pond. We need to decide — council, administration, and the residents that live there — what that pond actually is. To me, if it’s a dry pond, you rock it, you fence it, and there it is. And if there’s water in there then so be it. If the residents or administration or council believes that should be part of the park, then dirt needs to be taken out, it needs to be redone. Decisions need to be made on exactly what that is. If people feel that it’s de-valuing their homes — which that’s debatable — then we need to decide.”

De Vlieger appeared to agree that taking a continued stop-gap approach to the situation would not be beneficial to all parties involved.

“It’s quite a complex problem, and to get rid of the alkali, there’s different solutions, but personally I think we just have to dig it out to the clay lining, put good topsoil back in, sod it instead of seeding, and make sure that it never fills up for more than a couple of days. Because if it’s a couple of weeks it will choke it to death and the whole process starts over again.”

Interjecting in defence of the previous landscaping contractor, Holmen indicated their original recommendation had been to start over with the dry pond facility, but had been limited by town funding allocations.

Strojwas appeared unimpressed by this explanation.

“If they recommended not to go down that line, what kind of a contracter would go down that line and do a half job? If they knew it wasn’t going to work, why would they take the work on? Because they see the dollar signs the town was paying?”

Holmen asserted that wasn’t the situation.

“My understanding was they weren’t 100 per cent sure it was going to work, but it was worth a try, and the town authorized it.”

Following discussion, council voted 6-0 to receive the unofficial petition correspondence regarding the old rodeo grounds dry pond for information purposes, and requested administration contact experts in the area to give recommendations to administration and council on how to rectify the issue. Coun. Laura Ross-Giroux was abscent from the meeting.