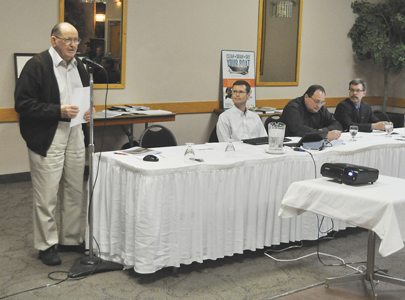 With the Taber Irrigation District celebrating its centennial in 2015, producers will be reflecting on the long history of the district and the continuous efforts of their forebears to bring life-giving waters to the arid plains of southern Alberta.

Integral to the governance of the TID board for almost half of the district’s existence, Keith Francis has stepped down after 46 years and is being honoured at an open house and reception on Friday at the Heritage Inn at 6 p.m.

Speaking at the TID’s annual meeting on March 25, at which Francis served as the meeting chair for the last time, he spoke about the district’s origins.

“We are entering another year of change as the TID board will see two directors retiring. Dennis Fenske, having served 26 years, and Keith Francis serving 46 years, will be leaving. The irrigation family is proud of the work these individuals have done in our district,” said board chair Tony Machacek. “This is Mr. Keith Francis’ last board meeting. He has been a staple to this area for the last 46 years. He’s left his fingerprints on everything around here.”

“There’s not much he hasn’t touched, all of the people he’s worked with, in irrigation, government. As a farmer, I wish to say thanks.”

District manager Chris Gallagher also had positive words for both board members for their hard work and dedication throughout the decades.

“I am grateful to have had the opportunity to work with Keith Francis and Dennis Fenske, who ensured that our heritage and accountability to our water users were not lost. I will miss their presence, but we’ll never be far from the contributions that they have made to our district.”

“I’m not quite through yet, because they said they wanted me to talk a little bit about what’s happened in the last 46 years,” said Francis. “I thought it was interesting that the water started flowing in 1921, 94 years ago, and I’ve been on the board almost half of that time. It doesn’t seem possible. In 1969, we hadn’t even heard of pivots then, there was still a lot of gravity irrigation going on. My father served on this board as the chairman, and he was chairman at the time that he passed away due to an automobile accident, and I took his place on the board.”

Francis outlined how attitudes toward government funding of irrigation districts and projects have changed dramatically since the origins of the TID in 1915.

“During that time, in 1965 or so, they replaced the flume at Barnwell and put in the dirt structure there. Up until that time, the Taber Irrigation District had not received one dollar from any government agency of any kind, and they took pride in the fact that they made everything themselves. They took out a debenture in 1915 to build the canal system that created this district. My father was chairman of the board when they made the last payment on that debenture, and they burned it up. Then when they decided to replace the Barnwell flume with a fill, the provincial government provided some funding to build that fill for the Taber main canal. My father was very concerned that they’d received money from the government to do anything for the TID. I wonder what he would think about today, with all the money we receive from the government?”

At the conclusion of the formal portion of the TID’s annual meeting on March 23, a visibly emotional Francis thanked producers for their recognition of his efforts in helping make irrigation a mainstay of the economy of southern Alberta.

“I want you to know that for the most part, it’s been a wonderful experience, and if I’ve made any contribution, I’m grateful. I want you to know that I’ve enjoyed it, and it’s time that somebody else took my place. I thank all of you as farmers for the support, encouragement, and the way that you have worked with the board and our staff, to operate the Taber Irrigation District, and make it one of the best irrigation districts in southern Alberta.”