Inspector sounds off on controversial bylaw 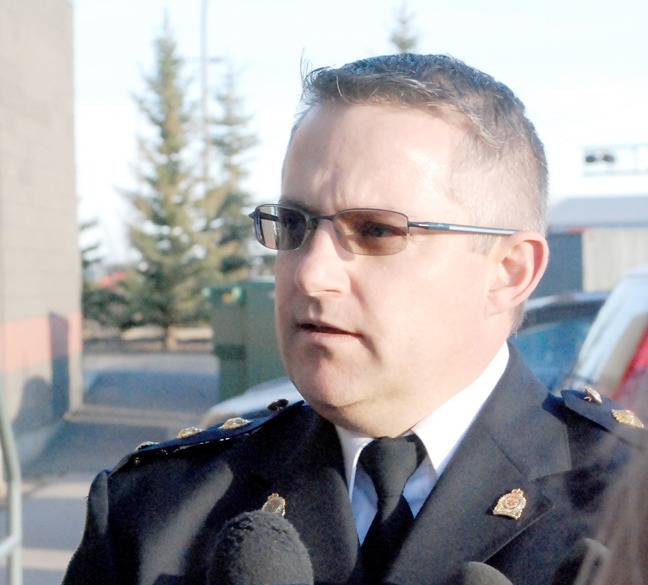 Feeling the Taber Police Service, Taber town council, and Taberites themselves have been unfairly branded under the controversial Community Standards Bylaw making its way through national and international social media, TPS held a public information session Friday evening to dispel any perceived misconceptions about the bylaw.

Passing third reading late last month, Inspector Graham Abela was critical of social media which has spread worldwide with the notion some of the provisions in the bylaw feature draconian measures.

“Some in social media have questioned whether this bylaw is constitutional,” said Abela, to approximately 40 people listening to the presentation in the Dreaddy Room of the TPS building. “We as a police service enforce many different laws,” said Abela. “I can tell you under no uncertain terms if the police service believes a law is unconstitutional, we will not enforce that law.”

If the TPS charges anyone under the Community Standards bylaw, the person has the ability to bring a Charter application before the courts and challenge the constitutionality of the law, according to Abela.

“If a judge determines a law is unconstitutional, they will make a ruling as such. Either the lawmakers will be able to appeal that decision, change the law or remove it completely from the books,” said Abela.

Abela noted the TPS has a mandate to inform, involve, and protect the residents of the community. Asked about the social problems that are occurring in the community, that information is used to make bylaws which began the formation of the Community Standards Bylaw.

Of the 27 sections in the new Community Standards Bylaw, 14 of them are incorporated from previous bylaws that have been enacted in Taber. Four were previously dealt with from the Criminal Code or provincial statutes.

For municipal bylaw enforcement in Taber for 2014, there were 451 bylaw reported issues. Of those 451 bylaw issues, Taber Police Service laid 55 charges. Of the 55 charges that were laid, 54 resulted in convictions.

“Most of these issues are resolved through effective community policing principles, conflict resolution skills of our police officers and common sense. Something that social media seems to be lacking. There is no reason to believe that our police officers will take this bylaw and start throwing tickets at people for new offences under this bylaw.”

Education, and issuance of verbal warnings followed by written warnings, Abela noted, would be the course of action the police would take before enacting the bylaw.
Abela cited other communities have enacted similar community standards bylaws with each of the sections featured in Taber’s Community Standards Bylaw being from another community.

“For the last 10 years, communities have been instituting community standards bylaws such as ours with no backlash whatsoever,” said Abela.

“I ask you, what’s different from ours?”

The police inspector then went on the offensive, explaining in his perspective the catalyst that caused all the “sensational nonsense” that has had Taber get not only national, but also worldwide scorn.

“And the second is opinion based, non-researched sensationalized reporting, starting with the local paper. Everything you have heard is based on opinions, except for the authority of council to enact bylaws. Why haven’t Charter challenges been fought in other jurisdictions where these same bylaws have been around?”

“No sensationalism, no hyperbole, no legal experts saying its out of control. I’m at a loss at why us, and I simply bring you back to the above,” said Abela.

Examining the meat of the bylaw, Abela spoke of the curfew provision, remembering when he was 12 years old in Taber.

“I used to remember hearing, at 10 p.m., the Town of Taber siren to tell me to get my butt home because I was past curfew. We have had a bylaw for curfews since at least that time, 35 years ago,” said Abela.

TPS did a survey and found graffiti and mischief were the top concerns of the community. In response to that it was suggested that graffiti parameters be brought into the Community Standards Bylaw, which are new.

Abela noted Taber has a problem with large gatherings of individuals in the community that have drawn many complaints from the public. The assembly of persons is the provision in the bylaw that has drawn the largest amount of social media backlash from law experts and the national community.

“In 2013, we received 70 calls for service in this regard. The aftermath of these gatherings found by the public and the police have been things like used condoms, urine, other bodily fluids, beer cans, and bottles,” said Abela.

“We had had reports of public sex acts, traffic complaints, and complaints of impaired driving. In some cases threats have even been made against our police officers to draw us away from the community to a place where we will be alone and then be swarmed by these groups of people.”

Abela also referred to crowds assembling outside of bars at closing time as another assembly of persons problem which the provision in the bylaw is meant to deal with.

“The police, and no one else, has the obligation to allow and facilitate lawful assemblies. To ensure that others don’t interfere with that group of persons’ rights of Canadians to publicly protest,” said Abela, adding the TPS is well aware of a protest that is going to occur in the next few weeks over the Community Standards Bylaw in question.

“Our police service will proudly stand and let that happen.”