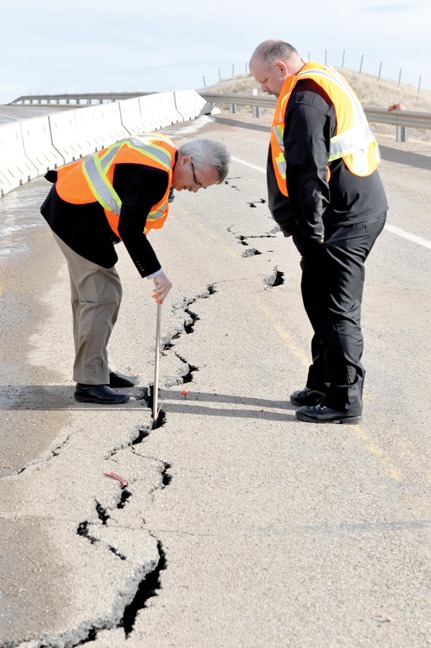 A dangerous stretch of highway south of Taber is going to be widened in order to keep traffic away from a portion of the road which is falling into Chin Coulee Reservoir.

During a meeting of the Veterans Memorial Highway Association South Zone on Feb. 6 at the Warner Senior Citizen Drop In Centre, representatives Darren Davidson and Gordon Zack from Alberta Transportation were on hand to update the association on the plans for Highway 36 near Chin Coulee Reservoir, which has been sloughing into the coulee since the 1970s and is now unusable in places due to breakup. Taber Coun. Jack Brewin was on hand for the meeting, as were Municipal District of Taber Deputy Mayor Dwight Tolton, Division 2 Coun. Tom Machacek, and Division 4 Coun. Ben Elfring.

“The coulee has been sloughing for a number of years,” said Elfring. “We’re scared someone’s going to go over right there one day. It’s getting worse.”

“We’ve been monitoring it since 1979,” said Darren Davidson, infrastructure manager with Alberta Transportation. He said in 2005, a plan was put together by Alberta Transportation to straighten the road and bring Hwy 36 in line with the bridge over Chin Coulee Reservoir, and there have been several experiments over the years to monitor the movement of the road.

Since November, the road has seen substantial degradation, however, with cracks widening and the east section of the road continuing to drop as the earth beneath it continues to move toward the reservoir.

“Our future plan is to realign the road, but that is in direct relation to the bridge,” he said. “So our short-term interim plan is to expand on the widening on the north side. We know the south side is going to continue to move, and we want to get the traffic away.”

According to Davidson, tendering would go out in the spring with work to begin on the road in 2015. When finished, the lane would remain in use until the province eventually decides to replace the aging bridge structure across the reservoir – though there is no set time for that to take place.

“That interim lane, how long it’s going to be there, is going to depend on the bridge replacement,” he said.

“It’s not the best situation right now, but it definitely could be worse,” he said. He noted Alberta Transportation has a plan in place should a catastrophic failure occur at the site. “We will detour traffic using the Alberta Highway System.”

Brewin said the road traditionally sees heavier use in the spring.

“We have to remember we’re currently coming into the seeding season, and there’s going to be heavy equipment coming across that bridge,” he said.

He also related a near miss he himself experienced recently involving a large truck.