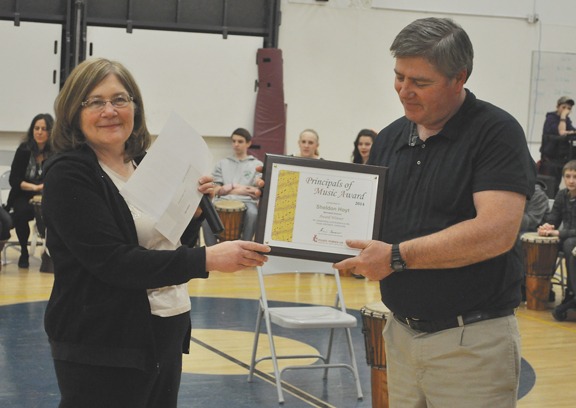 Sheldon Hoyt winning a Principals of Music Award was music ot the ears of Barnwell School.

The Barnwell principal was officially recognized for the award last week with a plaque in helping use his administrative skills at the school to make the music program at Barnwell School a vibrant one.

The Principals of Music Awards are presented annually by the Coalition for Music Education in honour of Mr. George Bishop, one of the founders and the first Executive Director of the Coalition.

The awards acknowledge the important role that administrators play in ensuring that music programs thrive.

In addition to national recognition, each principal will receive a cash award of $1,500 to be applied to their school music program.

The Principals of Music Awards are supported by contributions from the music industry in Canada.

“I believe in the arts in general, not just music,” said Hoyt. “There has been a lot of research that shows music helps in terms of learning and using music to help teach. Music helps develop the brain so kids can learn better.”

Barnwell School consists of Pre-School to Grade 9 with a population of just under 200 students.

While the school may be small in stature as far as overall enrollment goes, its impact is huge when it comes to its focus on music among its students.

Although Hoyt does not have formal musical training, he is often heard singing “oldies but goodies” and contemporary pop in the hallway.

He has made sure that monthly assemblies include at least one educational musical performance — reinforcing such curriculum concepts as the rotation of the planets, the Periodic Table, French language learning and protecting the environment.

The Barnwell principal has given up some of his own classroom space to store the music library and for use as a practice room. Under his tenure, Barnwell School has taken part in eight Music Mondays with the junior high band accompanying the elementary school’s singing of the Music Monday Anthem.

Although the award is entitled the Principals of Music Awards, Hoyt noted the award does not belong to just one person.

“I appreciate the award, but really the award should go to the people who do the music, I just make sure the music is happening.
“It’s recognition for the whole school,” said Hoyt, who has been principal at Barnwell School for over 10 years. “For me, I’ve had some extremely good music teachers over the years and support from my community. Without those two things, there’s no way I could run the program.”

That support means you have to put money into the program, and Hoyt’s commitment has been to ensure the music program at Barnwell School keeps going, although some administrators may think the arts are secondary.

“I believe we are the smallest school in Alberta who has a band program.
“And we are probably the only one that starts the band program at Grade 5,” said Hoyt.

“They are very fortunate, especially a school this size, where they are allowed to be part of that from Grade 5 all the way up to Grade 9. The arts in general are things that tend to disappear when budgets start to get tight.

“And to me, I’m relentless for not allowing that to happen. Easy solutions are cut your music program, but it’s not a good solution. We try and encourage the music program.”

Hoyt goes so far as to say not only should schools put an emphasis on arts funding, but the provincial and federal government as well.

“The province should be funding these programs better,” said Hoyt. “There should be music in every school, that’s my pitch to the government.”

The $1,500 will be used for more resources for the school where the program is constantly looking to purchase more instruments.

Hoyt has been known to personally deliver or pick up instruments in need of repair in the past.

“We do things like Music Monday and Kiwanis. We know if we don’t do performances, the music program will die. So we have to make sure the kids keep performing,” said Hoyt.

“If I think that music is important to all kids, then all kids should be taking music.
“We have the odd kid that ends up out of the music program, but for the most part, the parents are very supportive with what we do.”

Hoyt was the western region winner of the Principals of Music Award for 2014-2015.