St. Mary’s teachers grateful for getting to teach abroad 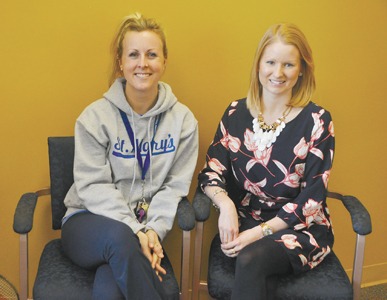 Two new teachers at St. Mary’s School this year literally bring a world of experience with them.

Lisa-Marie McDonald has previously taught in Seoul, South Korea and London, England. Kira Lawrence has had her education career span the Middle East in the city of Al-Khor in Qatar, just off the coast of Saudi Arabia.

A natural fit for both, who have a thirst for travel and teaching, the experience has brought a whole new perspective to their time teaching in Taber.

Thoroughly enjoying their time so far at St. Mary’s School, the experiences in some respects are like night and day compared to their teaching time internationally.

“When I taught in Seoul, it was a very different working environment. I taught in a private English immersion school from Kindergarten to middle school. It was a great learning experience because the classes were much smaller, with about 10 students or under,” said McDonald. “It was great because it gave me time to experiment with different teaching styles and learn different types of learners.”

In London, McDonald described it as a high-needs school with a challenging environment. Expectations were high not only with students, but the teachers as well.

“We as teachers got into this routine of producing high-quality lessons that were differentiated with a variety of activities,” said McDonald, adding the ratio was much higher of students at around 27 per class.

There is a bit more of a hierarchy between teacher and pupil in South Korea. Highly regarded in the country, students would come to McDonald’s class and bow at the door before they sat down.

“In many of these different countries, you become a doctor, a lawyer, or a teacher, and they are well-respected professions that are well-paid. That being said, the expectations are extremely high,” said Lawrence. “But there isn’t this need to parent, discipline, and teach the child. They are specifically there to learn. Any problems that come into the classroom are immediately dealt with by administration. There’s much more direct involvement in dealing with problem behaviours where it’s taken off the teacher’s plate.”

In Canada, you can find teachers feeding students, differentiating the curriculum, supervising, and dealing with problem behaviours according to Lawrence. But, with that comes a closeness to students that cannot be achieved in her experience teaching in the Middle East.

“There’s a million roles we take on, but that being said, it gives you a different relationship with students in Canada. It’s more, for a lack of a better word, intimate,” said Lawrence.

Both Lawrence and McDonald saw the immense pressure students were under in their respective international teaching experiences. Many students would have tudors after school where hitting the books is a 12-hour-a-day odyssey.

“There’s pressure especially to have an English education, because they really believe in the ‘American’ dream still and that is the way to prosperity and opportunity,” said Lawrence. “You have kids in Grade 5 having goals to go to university somewhere in America or England.”

That dream was just as prevalent in Korea, as McDonald noticed.

Lawrence would rave about the beauty of the Middle East with the beautiful olive skin and dark features, yet students would want green eyes with light skin, features Lawrence possesses.

“I love traveling and teaching. Our job allows us to do both. I’m really interested in other school systems and curricula. It has always been an interest to me,” said McDonald. “Every country has its own system which is very different, but very successful in its own way. I want to involve myself in as many systems as possible and learn as much as I can and bring it back to Canada because I know this is where I want my career.”

Lawrence’s teaching career started at Catholic Central High School, and she got the travel bug to see new cultures.

It was a self-admitted culture shock at first for Lawrence, as being a woman in a male-dominated Middle East. Also having a nose ring and tattoos, and it was an adjustment for Lawrence at first.

“For me, being in an Islamic culture and with the proximity to Saudi Arabia, Qatar is still very conservative. It’s beginning to open its doors to a lot of ex-pats now, so it’s slowly changing,” said Lawrence. “But, you are in 50-degree heat and humid and you need to be covered from ankles, to necks, to wrists. I had tattoos so they had to be covered at all times and there was no speaking of them, it is ‘haram’ which means sinful in Arabic. It wasn’t great I had a nose ring, but they realized I was form a different culture where it took a lot of conversations with the students and explaining acceptance and people living different ways.”

Lawrence added there is a mentality in the Middle East because of our media practices here, that white women are very ‘easy.’

“There are a lot of sexual advances and social advances and you have to be very tactful with how you are approached. There was more than one time that I was entering a taxi alone and the driver grabbed me, so you learn ways like carrying a pen if you have to stab them in the hand,” said Lawrence. “I learned to travel in pairs after that. You learn how to stay safe and let people know where you are traveling and communicate with family back home. But Qatar is an interesting area. Eighty per cent is ex-patriot and 20 per cent is national. Of the 80 per cent that is ex-patriot, 80 per cent are from rural India, Nepal, Bangladesh, Thailand and they are there as contract workers trying to build the city for the things like the World Cup and the other 20 per cent are females or professional males that are brought in for different roles like teaching, banking or law.”

“You are seen as a threat. Your culture is a threat to their culture and fair enough , I can empathize. You do run into that head-strong competition,” said Lawrence. “But then you run into other women saying ‘I got another ear piercing like you’ and ‘I love your tattoos’ and they colour their hair with their henna ink. They want to be western in some ways, but be traditional in others. There’s that constant pull one way or another. I tried to remain as respectful as I could with my dress and my approach in keeping my eyes down and things like that.”

Having started at St. Mary’s for the 2014-2015 school year, both have said the experience so far has been amazing.

With supportive colleagues and administration, the duo have talked about the ‘educational family’ feel at St. Mary’s.

“I’ve never taught as such a small school before and I’m seeing the benefits and all the advantages. Even though I don’t teach every single student, I know a lot of their names,” said McDonald. “I’m able to develop relationships with them and I think that changes the dynamic of a school.”

Coming from a high school background, Lawrence teaches Grade 6 at St. Mary’s along with physical education, along with being a wellness project leader.

“We’re trying to build community and school spirit with something we can all connect around,” said Lawrence.

Lawrence has also coached the Grade 8-9 Storm volleyball girls team and is planning on coaching slo-pitch in the fall. Teaching yoga in Lethbridge, Lawrence has slowly been bringing yoga into St. Mary’s as an exploratory class.

“We have been focusing on the physical moments and connecting with our breath and coming into relaxation and relieving stress,” said Lawrence. “And we are starting a staff yoga group.”

McDonald teaches Grade 6-11 Social Studies and English along with vocal jazz and helping with the grad committee.

“My instrument in university was violin, but I have a lot of experience in choral groups and vocal jazz. I think any type of vocal group is essential for a school,” said McDonald. “This vocal jazz group called Vocal Point is more of a modern take on popular music and I tried to add a jazz and rhythm background to the music they are listening to, to keep them interested and expose the to different harmonies.”

In every facet that the duo have taught or volunteered at St. Mary’s School, the start of their teaching careers at the school has been a memorable one so far.

“It’s a very welcoming and community environment. There’s a distinct personality here that is a very relaxed, happy and positive atmosphere. It’s been a great start to the year,” said Lawrence.