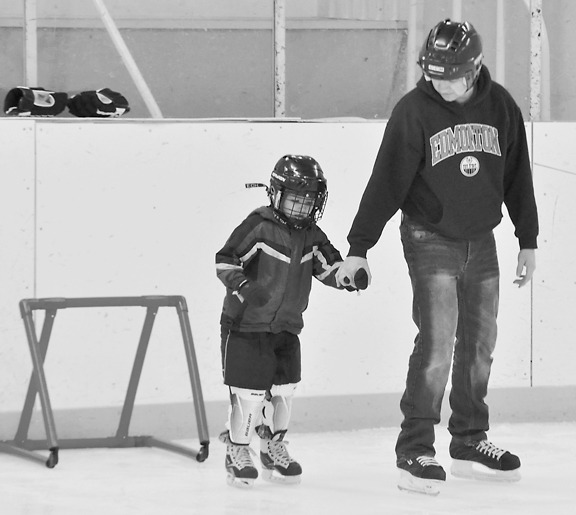 A mandatory helmet policy for public skating developed internally by town staff has drawn significant fire from town council as to where the authority to set policy ultimately resides.

The Taber Recreation Board discussed the policy at their Dec. 4, 2014 meeting, which had been developed internally by staff to govern public skating sessions, but had not been brought before town council for discussion or approval.

In a Jan. 4 written statement provided to town council and administration, Mayor Henk De Vlieger expressed concerns with the process that was involved in implementing such a policy.

“The last couple of days I have been approached by people that have some reservations about the helmet policy article in The Taber Times (“New helmet policy implemented for skating”, Dec. 31 edition, page B3). After reading it, I got confused that administration can set policy. It is my understanding policy can be designed by administration, then presented to the rec board, and they make recommendations to council.” “Ultimately council has to justify policies to the public. After reading this article, I have some reservations.”

According to town estimates, as many as 80 to 150 skaters can be found on the ice during a public skating session at the Taber Arena.

“People want to be safe, and we want to be safe, but I think we also have to realize that we don’t have to become a nanny town, or a nanny state — people still have responsibilities,” said Mayor De Vlieger at the Jan. 12 meeting of town council. “It’s really easy to put up rules and regulations, but it takes some of the fun out of it. I found it goes a little far.”

“All I want to say, in short, is that it should be a user-friendly town — in the skating rink, in the swimming pool — we really have to watch that we don’t start over doing it with the rules,” said Mayor De Vlieger. “The rules have to make sense, but they also have to give the people some responsibility themselves.”

Upon further investigation, only one of the five communities previously cited as having a mandatory helmet policy in place was found to actually prohibit skating without a helmet for all ages. Policies reviewed from Okotoks, Drayton Valley, Lloydminster, and Leduc were found to contain variations of verbiage that helmets were only “strongly recommended” rather than mandatory.

“There’s other municipalities that were mentioned in The Taber Times,” said Mayor De Vlieger. One of them has that policy or rule, but the others are ‘recommended’ or ‘strongly recommended’.”

Under the original policy development, any CSA-approved helmet, such as a bicycle helmet, would be considered appropriate.

“It came from staff, saying we should have our clients wearing helmets all over,” said CAO Greg Birch. “It was put in place for a two month trial, there was some resistance, but people seem to be OK with it now. We’re happy to do whatever you want. But the reason for it was concerns over concussions. It has nothing to do with our insurance, it doesn’t affect our insurance rate at all.”

Staff reported some initial resistance from users, but the policy had now been accepted by most, and indicating a measure of positive support from the public.

Rec board member Coun. Andrew Prokop pointed out that any miscommunication was not due to inaccurate reporting by The Taber Times.

“It was reported to us as policy at the rec board level. The paper (The Taber Times) got it right. If you read that article, it’s very clear on what they heard, and accurate about what was said there. The bottom line is, it was also suggested that it might be difficult to enforce that, mainly because a lot of the figure skaters don’t typically wear helmets. I can tell you, the people I’ve talked to about this are not OK about it. I don’t think anybody likes to be dictated to as to what they should or shouldn’t do, when it comes to safety. ‘Strongly recommended’ is a beautiful way to put it, and nothing wrong with that, and I think it covers all the bases. That’s the way I’d like to see that go,” said Coun. Prokop.

In a scolding rebuke of town staff, Coun. Randy Sparks indicated the proper approach to creating policy in this situation was either ignored or not followed, leading to a serious breakdown of due process.

“The proper way for this to happen is if staff has an issue, bring it to administration, administration brings it to the rec board, the rec board recommends to council that a policy needs to be set, and council sets policy,” said Coun. Sparks. “That’s how it should work. I don’t think staff can set policy. It has to come to council. So this should have been recommended to the rec board. When I read the words in the paper, I really don’t like those words — that the rec board ‘was made aware’. The rec board should have been in the loop far previous to this. I am of the belief that we recommend that helmets are worn, and I think that’s all we need to do.”

Administration’s recommendation that the existing policy approach be left in place requiring all public skating users to wear a helmet, was not followed by town council.

At their Jan. 12 meeting, council voted unanimously to request further input and review of the policy by the rec board at a special meeting of that body, with the recommendation that a mandatory helmet policy be replaced by a “strong recommendation”.

“We have a rec board for a reason, and I really hate to supercede them and just say we decided to do this,” said Coun. Sparks. “I think this should go back to the rec board, here’s where council coming from, what do you guys think? Let the rec board make a recommendation to council, and then council can go from there. Just to keep them in the loop and make them aware that we appreciate their input on situations like this.”

For coverage of the Taber Recreation Board’s special meeting on Jan. 14 regarding the helmet issue, please see Page A6.