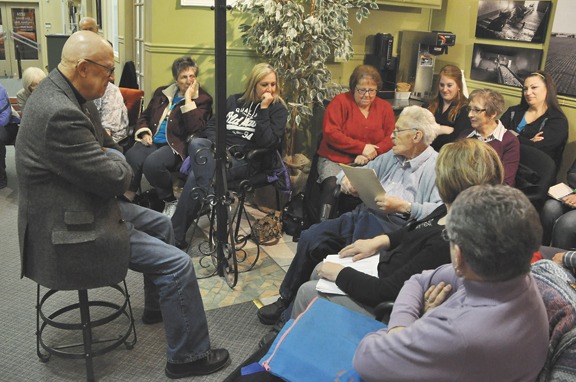 Serious allegations about the quality of care being delivered for residents of Taber’s designated assisted living facility, Linden View, have been raised with Cardston-Taber-Warner MLA Gary Bikman by concerned citizens.

During an evening meeting held recently at Bikman’s Taber office in late November, a sizable group of family members of current or previous residents, current and former employees, and at least one previous resident gave testimonials about their experiences with the DAL facility and its management.

The majority of accounts were consistent in their criticism of Linden View’s operations with regard to poor food, dirty rooms and overall cleanliness, and a lack of properly-trained staff.

“Two months ago, they were going to kick my mom out of her room because she wasn’t keeping her room clean,” said Wanda Osburne-Campbell, a family member of a Linden View resident. “My mom cannot bend — she has a hernia — she can’t clean her bathroom. I have pictures on my phone of how bad her bathroom was. The food is really, really bad — she has lost weight being in there. Half the time she’s soiled — I put an ‘X’ once on my mother’s Depends and I went back there at suppertime, and she had sat for six hours in soiled underwear.”

The Linden View DAL facility is currently operated by The Good Samaritan’s Society, a non-profit organization which receives significant public funding from the provincial government for its operations.

“I have been upset with Linden View for some time, and all of a sudden they’ve come out of the woodwork,” said Judy Jensen, another family member of a resident. “My concern was the care of my parents. My mom and dad have been there for 27 months, and I’ve watched them slowly decline, not because they were getting older, but because of the very poor care there.”

Many accounts shared a familiar theme of the personal cleanliness of residents being neglected, with individuals detailing instances where residents would be found in soiled clothing due to emissions of urine or feces for long periods of time without being attended.

“The cleanliness. When we go in to visit, we often go and sit in the common area,” said Melanie Hansen, whose mother is a resident. “But I’ve seen four or five individuals, completely soiled, and the chair is soiled. It’s the cleanliness, it’s the care — we always knew who was on by the way mom behaved. Some of the caregivers I absolutely adore, and some are just so hard.”

Other accusations included bad housekeeping, staff being inappropriately dressed and even employees reporting for work while intoxicated.

“I voiced some of my concerns to Michelle (Day, site manager) about some of the care by the staff,” said former employee Sandra Laczo. “We were going through staff left, right and centre, because it’s very frustrating to work there. I was told at a meeting that basically my expectations are too high, just to do my own job, and not worry about how the other patients and residents are treated.”

The most abrasive comments were reserved for site manager Michelle Day, with family members of past and present residents as well as former and current employees describing Day’s professionalism as lacking, while alleging she actively promotes an atmosphere of bullying, intimidation, and harassment by management for both residents and staff.

“It boils down to the almighty dollar, that’s why she’s (Michelle Day) running them short, working everybody short, and the care isn’t there,” said Christine Mykytiw, another former employee.“I was at Linden View from Day One, with several others who are fired now or quit, because of the way Michelle Day treats people and mismanages. My point is, if this how she treats the staff, what are the patients being treated like? It’s not right for senior citizens to be treated this way.”

According to The Good Samaritan Society’s chief financial officer Sindy Thompson, for the 2014-2015 fiscal year, the Linden View facility received $5.8 million in total funding from Alberta Health Services. Accommodation fees charged to residents range from $1,646 per month for a studio suite to $2,162 per month for a one bedroom.

“Basically, I found most of the workers really good and compassionate,” said Patty Lund, whose husband was a resident. “A lot of people will work well whether their superior is the pits or not, and other people will sluff. There are some people who should be selling shoes, not looking after our loved ones. Some of these people built this province, and they’re getting treated like this.”

After individual testimonials at the meeting, which was attended by 17 and stretched for almost two hours, Bikman commented on the major themes of complaint that were presented, which seemed to focus most prominently on problems with management, a general lack of care for residents, and the overall cleanliness of the facility.

“This is a serious issue, and I’m going to talk with some other people that see these kinds of problems in other parts of the province, and when I describe what you’ve shared with me tonight, I’ll find out if this is much more serious here — as it sounds like it is.”

Bikman went on to note the main allegations that had been made about the facility in Taber.
“Some of the problems are common to just the challenges of dealing with older people as they lose the capacity to care for themselves. That’s to be expected. So I want to put all of this into perspective, because from what I’m hearing, it’s pretty horrible, and it’s beyond acceptable. A common theme has been Michelle (Day), and the way she treats people. A common thing that I’ve heard tonight is that there aren’t enough staff, that some staff aren’t adequately trained before they’re given responsibilities beyond what they’re trained to deal with, and then the issues of cleanliness.”

Bikman closed the meeting with a promise that he would be bringing the group’s issues to a meeting with the health and seniors ministers, as well as The Good Samaritan’s Society’s corporate management structure.

“It all comes down to systems, and we’ve got a system that’s broken. I suspect that Good Sams has systems that work in other places, but good managers know, and good leaders of companies know, if things aren’t working right, you’ve got to take a look at your system, and if your system is sound, then you’ve got to say ‘who’s on this Linden View bus?’ Get the wrong people off the bus and the right people on the bus, and get the right people in the right seats on that bus. That’s the message that I’m going to take to the leadership of Good Sams.”

Responding to the allegations made about the Linden View facility in an interview on Monday, the Good Samaritan Society’s president and CEO, Shawn Terlson, indicated Linden View has always passed provincial audits for cleanliness and other licensing requirements.

“Linden View prides itself on giving quality care,” said Terlson. “We’ve met 100 per cent compliance on all legislative requirements, including continuing care health standards, accreditation licensing for accommodations. Linden View takes all accusations of not providing quality care seriously, but like I said, we’ve met all of the licensing standards. I was just at the facility two weeks ago — I eat at the facility every time I’m there — I have met with your MLA (Gary Bikman) and asked that he attend the facility, because he did have complaints about food from one of his constituents. He did attend a meal there, and by all accounts it was good, quality food.”

Terlson described Linden View as a showcase facility that is often considered a template for future developments.

“Linden View is one of the best facilities we operate. It’s my favourite facility, and we’ve been using it as a benchmark for any new facilities we create going forward. I was there a couple of weeks ago, and I never noticed any cleanliness problems. Alberta Health Services does its reviews and accommodation standards, and we’re always 100 per cent in all those areas.”

As for any lack of professionalism on the part of staff, Terlson indicated this was the first he’d heard of any complaints.
“I couldn’t comment on that. I’ve never directly received a complaint looking into professionalism at the site.”

Care of residents at the facility is professional and beyond reproach, according to Terlson, who pooh-poohed any suggestion residents were being mistreated.

“I honestly don’t agree with any of those assertions. I meet twice a year with the residents on site, and the last time I met with them was in August. We had probably 25 different residents in one of the dining rooms, and asking if there was any concerns with quality of care. Anyone that vocalized anything indicated that staff was fantastic, and that they cared for them in a great way, and that the food was very good.”

Terlson went on to defend site manager Michelle Day, who had borne the brunt of some of the allegations made about management of the facility.

“I know Michelle Day quite well, who is the site manager. She seems by all accounts to be a very caring individual, and when I see her on site with residents, she’s holding their hands, touching them, talking to them. I’ve never observed anything, specifically, that has been brought to my attention.”