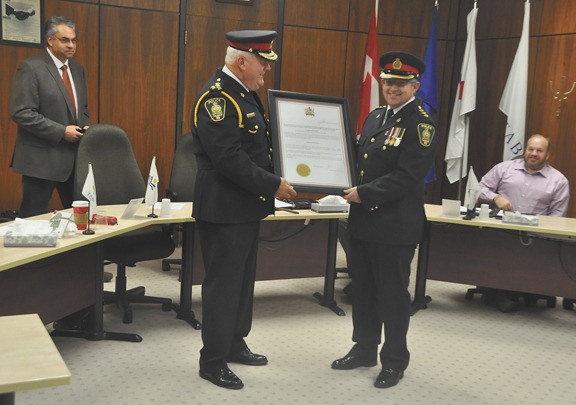 During a ceremony last week, Insp. Graham Abela of the Taber Police Service was honoured with a commission and a long service medal for his two decades of service to the community.

At the Taber Municipal Police Commission meeting on Wednesday, Chair Ken Holst heaped praise on the long-serving inspector and his outstanding dedication to service and duty.

“It is a pleasure to be here and contribute to this medal presentation and commissioning ceremony for Inspector Abela,” said Holst. “The commission Insp. Abela is receiving today is recognition of his lifelong commitment to serving the greater good. The medal he will receive is in recognition of over 20 years of honourable service to the Province of Alberta.”

Holst focused on the duty of officers, now and in the future, to protect the tripartite pillars of Canadian democracy.

“The commission is recognition of the considerable time, energy and skill you have devoted to protecting cherished ideals that are cornerstones of our Canadian way of life, including the rare gifts of peace, freedom and order that we are privileged to enjoy as citizens of this country,” said Holst. “You are a leader in efforts to maintain that peace. It is a challenging job requiring strength, courage, honour and a deep commitment to excellence. Congratulations on your commission and your service milestone.”

In relation to the commissioning of officers, historically the armed forces needed to operate in a rank structure so that those in charge could give effect to orders and maintain discipline. The reigning monarch would issue a Commission of Authority in the form of a Royal Parchment to the officers, and their direction held the power of the throne.

This is still the manner in which modern Commonwealth military organizations are structured. Policing is recognized as para-military within the command structure and the Queen’s Commission is applicable. Commissioning of officers in policing is a common practice in Canada, with Alberta being an exception until the Police Act was revised to implement the practice in 2014.

Power is vested in the office of the Lieutenant Governor to grant commission to municipal and First Nations senior police officers in Alberta.

“The commission is a parchment document issued by the Crown to individuals who were to be in charge of other men,” said Chief Alf Rudd of the Taber Police Service. “The commission would allow that commissioned officer to issue orders, and so that those orders would be obeyed, and in the event they weren’t obeyed, then there was consequences to that. Because we have to maintain order, in order to maintain order.”

Rudd was honoured earlier this fall in a commissioning ceremony as a municipal senior police officer in Alberta, which now allows him to commission fellow officers.

“That’s the purpose of the commission, and throughout history, these commissions have been offered up by the Queen to the ranks of police and military organizations. This commission is recognized now in the Alberta Police Act,” said Rudd.

The commissioning and medal presentation, which took place inside Taber town council chambers, saw the gallery filled with Abela’s colleagues, family and friends to witness the ceremony.