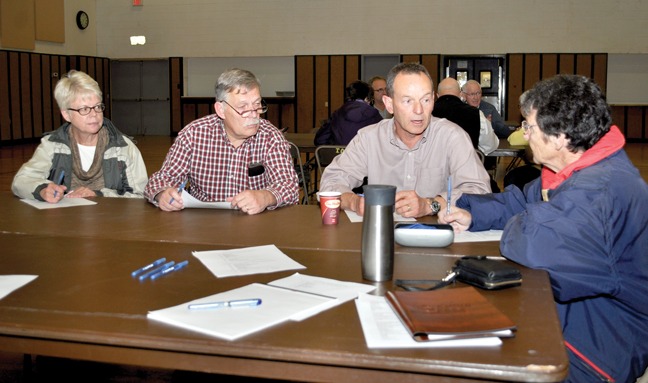 There are no preconceived notions.

There are no wrong answers.

This is the advice Doug Emek, Taber Arts Facility Committee chair, told more than 30 people in attendance at an open house last Tuesday designed to bring the interested public in on a discussion aimed at measuring the appetite local residents have for a new arts facility.

Emek said while the community is well known for sports facilities, it is lacking spaces which can be used for the performing arts.

Following a brief introduction of the committee and their goals, local residents, members of town administration, town councillors, and M.D. councillors took part in table discussions designed to gather thoughts and explore ideas about a new facility.

Some of the discussion included the abandoned centre court project and the $1.7 million price tag behind it.

“Despite our best efforts, that project was not able to be completed,” Emek told those in attendance.

When asked why the cost of the project had to be so high, it was explained that only $500,000 would have gone into the design of the building, while the bulk of the $1.2 million remaining would have been used to bring the buildings up to current building codes.

Coun. Joe Strojwas asked if the old court building could be moved so the land could be used again, but town Chief Executive Officer Greg Birch explained that as a historical designation, the courthouse needed to stay where it was and there are guidelines regarding how the building could be utilized.

Following the open house, Emek said he was happy with how the evening progressed.

“We were very pleased with the turnout,” said Emek.

“I think there was a lot of good discussion at each of the tables. We got lots of feedback, so that’s what we were looking for.

Emek said it was too early to tell the nature of the information gathered during the session, but the committee will be busy going through everything prior to presenting their findings at a Nov. 24 town council meeting.