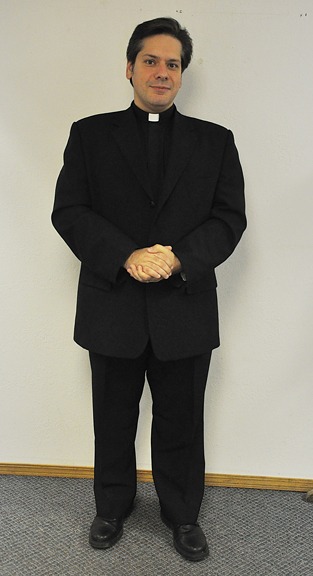 Taking over this fall at Taber’s Peace Lutheran Church is Pastor Basil Christi, who originally hails from urban Ontario but is now settling down to rural life in southern Alberta.

“We arrived in mid-August, and I was formally installed on Sept. 7,” said Christi.
“But I had begun settling in just prior to that. I wanted to get my feet wet, and get the lay of the land as well. I served my vicarage in the city of Waterloo, Ont. at Redeemer Lutheran Church. So we came straight from Waterloo out west, right out here. I’ve never been out west before, all I’ve known is the Golden Horseshoe in southern Ontario. I’ve been through the United States and I’ve been abroad throughout Europe, but not out in Western Canada.”

Christi, who goes by an Anglicized version of his Greek name, also serves Duchess Lutheran Church near Brooks. Christi and his family reside in Taber.

“Basil Christi is what I go by, but it’s actually not my name. My real name is Vasilios Christoforidis.”

Christi and his family reside in Taber and are enjoying southern Alberta since coming to the region.

“I love the topography, it’s beautiful. I’m getting used to the climate and the change in landscape as well, because it does change dramatically as you move further out west, and even further north.”

Christi is hoping to serve well in his capacity as pastor of both congregations.

“My primary duty to the congregation is to come and serve in the office of the ministry through the word and sacraments. Right now, I’m looking to settle in first and serve God’s people there, as I’m called.”

Not always an individual devoted to the faith, Christi’s spiritual journey and later awakening came from an initial desire to discredit an idea he has now dedicated his life to.

“I became a Christian late in life by trying to discredit Christianity, so I come to the table with perhaps a different outlook. I have an emphasis in the area of apologetics, which is defence of the faith, because of my journey. I tend to lean towards a more liturgical form of worship, I have a great deal of respect for the ancient church, and its practices. But of course scripture is my soul authority. That might be what differentiates me from others, those that were brought up in the faith, is that I come from the outside in. I’m able to connect with people more readily because of that.”

Taber has taken some getting used to considering his urban background, admitted Christi.

“I do plan on being active in the community as much as possible, and to work also with the other clergy as much as is permissible. The community is definitely different from what I’m used to because I’m from major urban centres. Coming to a place with a population of 8,000 is going to take some getting used to. The people have been great, they’ve been very supportive.”

Christi has been careful not to introduce too many changes too soon to the way services are conducted in his dual parish.

“I’ve introduced changes, but I’m very wary of introducing changes too quickly. I’ve introduced singing the psalms. The Book of Psalms is the hymnal of holy scripture, and they’ve taken to it, so I was very pleased with that. Just some other little practices here that I’m altering, because I do believe that what you do reflects what you believe.”

Not afraid to admit his limitations, Christi indicated musical ability isn’t exactly one of his strong suits.

“They were concerned at first, they wanted someone with musical ability. I made it clear to them that while I can carry a tune, I’m not sure you’ll like the direction I’ll carry it. That’s one of the challenges, is the musical component of the divine service.”

Balancing home life and his work with the church is always a challenge for the father of two.

“I’ve been very busy. My time is divided between the two congregations. I have five hours of travel a week alone, and that’s a challenge without short-changing either congregation, and also not short-changing my family. While I have the vocation of pastor, I also have the vocation of father and husband. I’m equally answerable to God for how I function in any of those roles.”

Christi has been married for 18 years to his wife Rebecca, and has a daughter, Evangelica (8) and a son, Alexander (4). His parents immigrated to Canada from Greece.

Christi’s faith journey has taken him full circle in the course of his life.

“I was brought up, nominally, Greek Orthodox. We were in church twice a year, maybe — last ones in, first ones out. As a child, I didn’t get to hear the gospel. It was only later in life, when my fiance at the time, now my wife, became Christian, that I set out to discredit her faith because it had started to affect my hedonism. In the course of doing so, I used my background in history to follow the evidence, thinking it would lead down a particular road, and not down the road it actually ended up leading me down. Let’s just say the stone that was rolled away at Easter rolled right over me.”