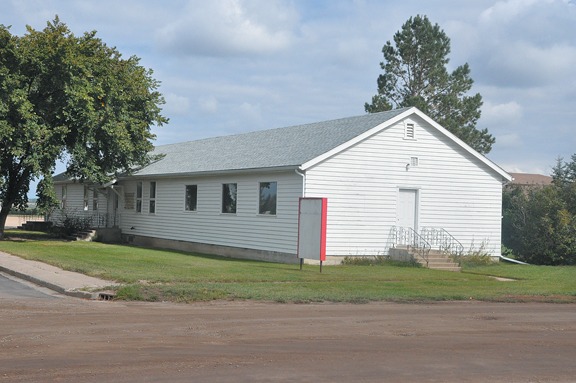 The Town of Taber is pitching in financial assistance to help the Taber Shooting Foundation transport a donated building to the new M.D. of Taber Sport Shooting Complex.

At their Sept. 8 meeting, town council voted unanimously to authorize an expenditure of $40,000 for moving costs to obtain a building for use as the main clubhouse at the M.D. of Taber Sport Shooting Complex, from operating reserves in the form of a grant.

“I’m in support of this range, it’s very good,” said Coun. Rick Popadynetz. “I think it’s a great thing for residents, and people all around this area.”

At their Oct. 13, 2013 meeting, Municipal District of Taber council approved the construction of the M.D. of Taber Sport Shooting Complex, located approximately eight kilometres north of Taber. Municipal construction crews were engaged on the project during late fall 2013 through spring 2014.

The former Bow River Irrigation District (BRID) building (also known as the former Horizon Mennonite Alternative Program school) in Vauxhall has been donated to the Taber Shooting Foundation, but would be required to be moved to the range north of Taber on Highway 864. The foundation was seeking financial support from council in the form of a contribution to cover the costs to obtain a building for use as the main clubhouse at the shooting complex.

“That may seem like a large building, but when you consider the number of shooting disciplines that we are going to be accomodating out there, that building will lend itself quite well,” said Morgan Rockenbach, president of the Taber Shooting Foundation.

“That might seem large, but when you consider what cowboy action accomodates, you’ll understand that range will accomodate almost any cowboy action event that cowboy action shooters can come up with,” said Rockenbach. “They have shoots where they set up mock western towns, and they could conceivably operate up to probably 12 different shooting units at the same time, on a range of that size. When it’s complete, it would work, but at this point it’s not quite complete. When we do complete that, there will be some internal berms placed in there, and that’s where we’ll make internal cells that would accomodate different shooting events concurrently with a measure of safety.”

Parking for approximately 300 vehicles is planned, along with future developments which could include a trap, skeet, and sporting clays shooting range, as well as a day camping area to support competitive events at the shooting complex.

“I think about the old adage that it’s easy to build, but hard to maintain and carry on,” said Coun. Randy Sparks. “I think as this facility becomes operational, and there’s events being held out there, it will generate a lot of interest. I think that will really help in securing the funds necessary to keep this facility going. If you build it, they will come — and they will. There will be events, and people will come. This will be a very viable thing in the future.”

The completed facility will be large enough to host local, regional, provincial, national, and international competitions involving 200 or more participants.

“Without the huge contribution the M.D. has made, obviously you would be no where,” said Coun. Joe Strojwas. “They’ve put in hundreds of thousands of dollars to facilitate this for you.”

Other organizations and individuals involved with the project include the Chief Firearms Officer of Alberta, the Taber Pistol and Revolver Club, Taber Fish and Game Association, Taber Archers and Bowhunters Association, Southern Alberta Riflemen’s Association, and the Cowboy Action Shooters.

“We’ve been approached by several law enforcement agencies that have asked us about usage, and yes, this will meet the guidelines for their tactical training and normal duty training,” said Rockenbach. “Whatever training they need, it can be done here.”

“Forty thousand dollars isn’t just pocket change — $40,000 from the Town of Taber is to me a very large contribution to this facility,” said Coun. Sparks. “This is a very sizable donation, and one that will be money well spent I believe.”

Once completed, the outdoor shooting range is intended to facilitate firearms and archery safety, education, training and skills development for all ages (under qualified supervision) who are interested in learning how to safely use firearms and archery equipment, or are currently engaged in these sports and desire to improve their skills.

“Of course we know the incredible contribution the M.D. has made in this whole process,” said Coun. Sparks. “Is all the hours being tracked that the M.D. is donating? Sweat equity and in kind contributions, that’s very important to track that when you’re going after grants. My hat is off to the M.D. for what they’ve done, because this is an important addition to the M.D., and to our area here, this range that has been developed out there.”