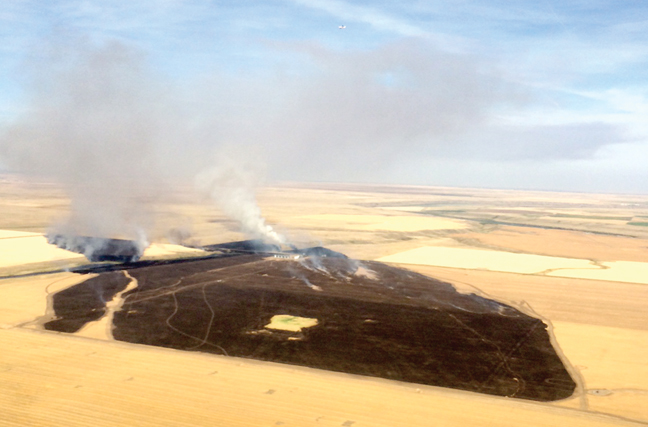 Air support along with fire crews from four towns were called in to battle a massive blaze that erupted along Hwy 864 near Township Road 11-4 north of Taber Wednesday.

Fire departments from the towns of Taber, Vauxhall, Coaldale, and Enchant began arriving on scene within 15 minutes to battle the blaze, with more than 30 firefighters involved and a number of support vehicles such as water trucks, crop dusters, and a Helitack (HAC) helicopter unit called in to the area. Steve Munshaw, Taber Emergency Services fire chief, estimated there were five trucks and at least 16 fire fighters present from Taber, and another two trucks from Vauxhall.

Working together, the crews fought the fire to a standstill within an hour and a half and then spent the next few hours putting out hotspots in the area.

According to , the fire started during a pea harvest when some material caught fire in the vehicle and was ejected onto the ground.
“They were doing their best, watering themselves down every 45 minutes and taking every precaution,” he said.
“Through the harvest process, the grass was caught on fire.”

During the fire, Munshaw said crews lost highway access to 864 due to heavy smoke causing visibility issues. In addition, crews battled the blaze from multiple flanks simultaneously to control the direction of the fire, forcing it down into nearby gullies in order to bottleneck the fire to put it out. He noted the volatility of material on the ground, and high, dry summer temperatures contributed to the volatility of the blaze, which travelled at estimated speeds of 100 feet per minute.

“The wind gusting at 25 kilometres per hour were definitely a factor that day,” he said.

“The fire was growing at such a rate you could not put people directly in front of it,” he added. “You needed to fight it from the flanks.”

Munshaw had high praise for the work put in by area firefighters.

“All the firefighters were amazing,” he said. “They stopped the fire in a great amount of time and there were no reported injuries.” He added help from air support and from farmers in the area was also of a great help.

An estimated 670 acres of land burned in total, which included a large section of Municipal District of Taber grazing land and as much as 410 acres of crop land.