Town getting faster on Internet highway 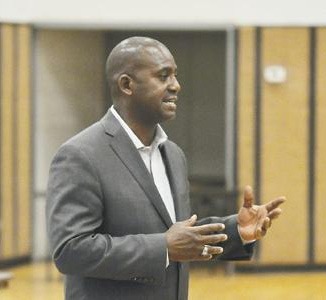 Business operators in the industrial area could soon have access to high-speed internet if upcoming negotiations between Shaw Communications and operators facilitated by the municipality reach a successful conclusion.

At their regular meeting on June 9, town council learned Shaw Communications recently approached town administration about a potential solution to the issue, and a meeting with corporate officials was set for June 19 in the Community Centre Auditorium to allow Shaw Communications to present its proposal to local industrial businesses and landowners.

“We’ve met a couple of times with Shaw Communications, and they’ve indicated they can move with fibre optic cable into the industrial area, with a main trunk line basically going up the middle of the industrial area, and then the businesses that want to connect with that, either by fibre optic or by coaxial cable,” said planning manager Cory Armfelt. “Shaw Communications recently approached town administration about a potential solution to the issue.

The meeting comes on the heels of a letter to mayor and council from Cam Mandel of Taber Diesel Services asking for action by the town to resolve the deficiencies in internet service in the industrial area.

Mandel noted upgrades to Taber Diesel’s information and business management system would not be feasible at the present location in the industrial area without significant upgrades to the current communications infrastructure.

“Like our roads and drainage issues in the industrial area, the communications needs of modern business seems to have been completely ignored by the Town of Taber’s economic development office,” said Mandel, in an excerpt from his May 5 letter to the town. “As businesses in the industrial area are we expected to just pay our taxes and get nothing in support? When the town spends more that $1 million on two intersections bulb-outs to ‘beautify’ a mostly vacant downtown, it seems to be very discriminatory toward the industrial area where nothing has been spent in decades.”

Mandel went on to request the town look into the matter and determine a solution that might satisfy business operators throughout the industrial area in future.

“I would ask the mayor, council and administration how as businesses we can expand and keep up with technology with 40-plus year old infrastructure? I would ask that a prompt resolution to this matter be undertaken by the town.”

Armfelt indicated any communications upgrade would not come free, but would have to be passed on to potential customers.

“Of course this comes with an expense, and what they’ve talked about doing — they’re in the planning stages right now to determine how much it would cost to start laying that line down, and then any businesses that want to connect to that, they’ve amortized that cost out over a reasonable time frame that would be workable for that business, for a five year or seven-year period.”

On June 9, council voted unanimously to direct administration to write a response to Taber Diesel Services’ letter, expressing council’s concern about the Internet shortfall currently existing in Taber’s industrial area, and explaining what the town is doing to try to address the issue.

“Shaw would front-end the cost of putting in that line, and then all businesses that want to connect to that would then sign up for ‘x’ amount of dollars, and then that would go on their Shaw bill until their connection fee was paid off,” said Armfelt. “We’re spoken personally with a representative from Shaw, and we went out and blitzed the industrial area. There’s a lot of interest in this from people in the industrial area. It’s a pretty exciting prospect that Shaw has come to the town with this offer.”

The Town of Taber would largely play a facilitating role in getting the project off the ground, according to Armfelt.

“The municipal component would be to work with Fortis to facilitate getting a Shaw wire on Fortis poles. They do work together, but I think it’s always a little bit better if the municipality takes the lead.”

Coun. Randy Sparks pushed for the town to do what it can to make sure the project is a success for local business operators.

“There’s not a question that this is good news. It’s very good news to here, and that this can hopefully come to fruition and get Internet for the industrial area, sooner rather than later.”

Armfelt noted a tentative timeline is being considered, with work to potentially commence and be completed this summer. Armfelt went on to note upgrades could help with future municipal plans to implement Wi-Fi service in the downtown core, recreational facilities throughout the community, and possibly even the industrial area.

Preliminary cost assessments have yet to be completed.

“We haven’t crunched those numbers yet, as it has to do with how they align, as there’s various hubs around the town, and there’s different combinations as to how to get the services to the main trunk through the industrial area, and how they’re going to tie into that,” said Armfelt.

Councillor Joe Strojwas was one town councillor among a few that showed up at last Thursday’s information session reiterating his words of encouragement to industrial section business owners who showed up.

“We have a new direction and new council in town. We’re pretty progressive. We’ve seen a lot of issues that have crept up over the years and this was one of them from the industrial section when we had one of our open houses,” said Strojwas at the Shaw information session. “I’m hoping we can partner with Shaw with the town and the industrial section for high-speed internet that is something more capable than they have now.”

Randy Hubscher, technical sales specialist for Shaw noted in the presentation Shaw has over 625,000 kilometres of fibre optic capability currently.

“Our latency is very low, which means it really increases your transfer speeds for data up and down,” said Hubscher. “That’s a big thing if you have corporate offices and you are trying to tie into field offices. Taber is actually a crossroads for us. We have invested a lot of money in fibre and we are capable of driving over 400 gig on just a few strands of fibre.”

Dustin Bedward, account executive for Shaw put it in perspective where all of Taber uses mostly ADSL type speeds which represents nine megs down and one meg up with no guarantees form current provider.

“We will come in and partner with you in Taber and its business community and put out a fibre network and build up both networks and give you a non-guaranteed 100 megs and the option to have a dedicated 100 megs off of fibre. On fibre it is guaranteed minimum five megs down, five megs up, guaranteed, sustained all the time.”

Shaw would be able to build up capabilities coxially and fibre with Wi-Fi included in the service with no charge.

“It will be installed in your common areas in your offices and buildings,” said Hubscher.

With an individual normally having two devices like an i-Pad and an i-Phone, usually it’s on the employee’s or company’s network utilizing bandwidth off the network.

“Shaw is saying you don’t have to do that anymore, we can carry that load and let you focus on your regular business as usual without having delays or slowdowns on your network,” said Hubscher.

“We can build it and any municipal infrastructure or facility that the town has, not only will our customers be able to have Wi-Fi throughout in the open areas where people gather, but it gives non-Shaw customers access which serves as a partnership and is a good asset for the town,” added Laurie Templeton, manager of government and regulatory affairs for Shaw for Alberta and Saskatchewan. “Say someone is coming into your campground for a week or is down for Cornfest, they can gain access simply from signing on.”

Representatives assured that Shaw Wi-Fi would not interfere with any other Wi-Fi that is currently in use within the town.

“No longer will you have to invest in this capability with the enablement of Shaw with a Wi-Fi service. That investment in the future form a business perspective would no longer be required,” said Hubscher. “This will help with the Town of Taber’s future because it takes you to the next level of service for technology. ADSL is old technology and old capabilities. We are taking you into the 21st century where technology is relied upon heavily and the demand is there. We are prepared to work with the town and its residents for services.”

Upon further discussion and if town council go forward with the initiative, investigations would be made to find out which business would need from a bandwidth perspective to determine how many people Shaw would need to deploy fibre to and what the cost would look like realistically and how many people would require coaxial for costs.