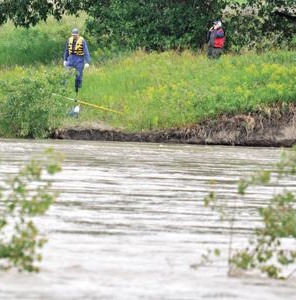 PARK IN PERIL: Southern Alberta has seen its share of flooding in June in recent years, with the M.D. of Taber Park falling victim with some areas still under water. TIMES PHOTO BY J.W. SCHNARR

To be on the safe side, the M.D. of Taber has decided to keep its local state of emergency intact until Thursday morning from last week’s flooding after the downpour from Mother Nature of between six and eight inches of rain.

The state of emergency was for the area south of Highway 3.

“It washed out a couple of roads. At one point in time (last) Wednesday evening to Thursday morning we had sections of Highway 513 with water running over the surface,” said Derrick Krizsan, chief administrative officer for the M.D. of Taber. “Overland water made its way south through the various courses and eventually made its way to the south side of SMRID main canal. We did have crews out on Thursday helping homeowners in the affected area and they did what they could to assist them with residential properties that were threatened by the overland flooding.”

“We have a disaster recovery program application that we will be recommending to council for sending off to the province.

What this application does is it not only allow the municipality to make claims for overland flooding, but it also opens up the disaster recovery program to homeowners an landowners who are impacted by overland flooding,” said Krizsan.

Pictures and Facebook videos have popped up showing the flooding destruction at the M.D. of Taber Park in which Krizsan suspects it will not be open for some period of time.

“We have crews that are very diligent who want to get out there and get the work done. The first thing we have to wait for is for the river to slow down enough to get into the park to do some pumping,” said Krizsan. “I anticipate there will be limited use by probably in July. There will be portions of the park this year that will not be opened because of the saturated conditions.”

“When you look at the geography of our area, the top of Chin Lake is 100 metres higher than main street Taber so you know which way the water is going to flow,” said Krizsan. “When you have that type of accumulation over that short of a period of time, it certainly causes a lot of damage.”