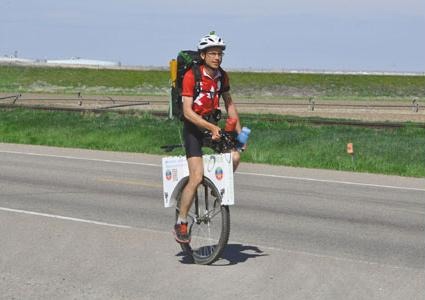 One voice can make a difference — or in this case, one wheel.

Joseph Boutilier is travelling via unicycle from Victoria to Ottawa, a distance of roughly 5,000 kilometres, to bring attention to climate change, respect for First Nations treaties and sovereignty rights, and the muzzling of publicly-funded scientists. The 24-year-old says his inspiration for the self-supported five-month journey came from several places.

“It was an accumulation of hearing what I considered to be pretty grim news stories about what science was telling us about our future, given climate change, but also about the lack of response from the federal government,” Boutilier said during a stop in Lethbridge Wednesday afternoon.

“I think when Canada backed out of the Kyoto Protocol, that was kind of a turning point for me. I realized I needed to make some time to address this head on.”

Boutilier quit his job in January and began planning the logistics for his journey. He also began training on the unicycle, which he designed with storage paniers that double as promo signs, as he only had minor experience on the one-wheel unit when he was a teenager.

He picked that form of transport in order to stand out, for a challenge and also to provide the right timeframe for an anticipated arrival in Ottawa for mid-September when the fall session of Parliament will begin. Boutilier hopes to sit in, as well as to speak directly to Environment minister Leona Aglukkaq.

“With the 2015 federal election just around the corner, time is running out for our MPs and political parties to make clear commitments to our environment and sustainability,” he said. “We will no longer stand for their casual neglect of our environment, our First Nations and our climate.”

Boutilier celebrated his birthday on the road last month and recently spent a week in Crowsnest Pass to recover from an injury. He re-activated an injury on his way into Lethbridge from Fort Macleod, but said he is hoping to power through, arrive in Taber later Thursday and get back on schedule by the time he hits Saskatchewan.

“With this extra injury, I just can’t push myself as hard,” Boutilier said. “So, worst case scenario, it will just mean delaying the actual arrival time in Ottawa.”

He said he averaged about 40 kilometres per day through B.C., but, despite the injury, that he wants to raise that to about 50 kilometres during the long flat stretches across the Prairies. Boutilier also said he’s had mostly positive reception and has been supported along the route by businesses offering billeting, food and donations.

“The level of awareness has taken me by surprise,” he said. “There’s definitely been a lot of mutual concern for the issue of climate change. Even drivers have been, for the for most, really respectful. I get a lot of friendly honks and waves.”

He is tracking his travels on his website at http://www.unityfortheclimate.ca.