Provincial election proves an electrified one 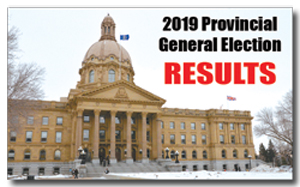 There was every indication that voter turnout in this provincial election was significant and may have even broken records.

In larger cities, in particular, Albertans protested in large numbers about the economy, lack of jobs and lack of any momentum for recovery of the oil and gas industry.

If that anger was representative of the population at large it could have encouraged people who are inclined to be tardy about voting.

The all-time voter turnout record was 82 per cent in 1935 when Social Credit was swept into power, pushing aside the United Farmers of Alberta, who had been in power for 14 years.

In the most recent provincial election in 2015, when many Albertans were unhappy about the sense of entitlement exhibited by the Progressive Conservative government that had been in power for so long — over 40 years — voter turnout was 57 per cent.

In 1979 a total of 58 per cent voted. That year the Progressive Conservatives under Peter Lougheed’s leadership were elected for a third term.

One of the worst voter turnouts was in 2008 with only 41 per cent voting. They elected the Progressive Conservatives under the leadership of Ed Stelmach, who had replaced Ralph Klein.

Advance polls have recently become more and more popular. Once used only if you were not available at all on election day, it has now become a convenience for people who do not want the pressure of having to make it to the polls on election day. The turnout at advance polls was record breaking, with almost triple the number of votes cast at the advance polls than in the 2015 general provincial election, with over 696,000 ballots cast province-wide in five days. The previous record was in 2015 when 235,000 cast ballots at advance polls.

Over the five days of advance poll voting, electors had the ability to cast their ballots at any of the 268 advance poll locations held across the province.

Angus Reid reported last week that the gap between support for the NDP and the UCP was narrowing. Its interpretation was that the UCP attracted older voters and predominantly men while the NDP was gaining voters from the younger generation.

A lot can happen in the last before voting. In 2012 the Wildrose looked strong until media coverage turned and the Progressive Conservatives pulled ahead.

On the other hand in 2015 it became increasingly clear in the last week of the campaign that the NDP had gained momentum and had a good chance of winning.

It was particularly disappointing to hear many voters say they were not casting a ballot “for” a candidate or party but rather “against” the current candidate or party. It is a sad reflection of our democracy that so many people feel disenfranchised by politicians and political parties.