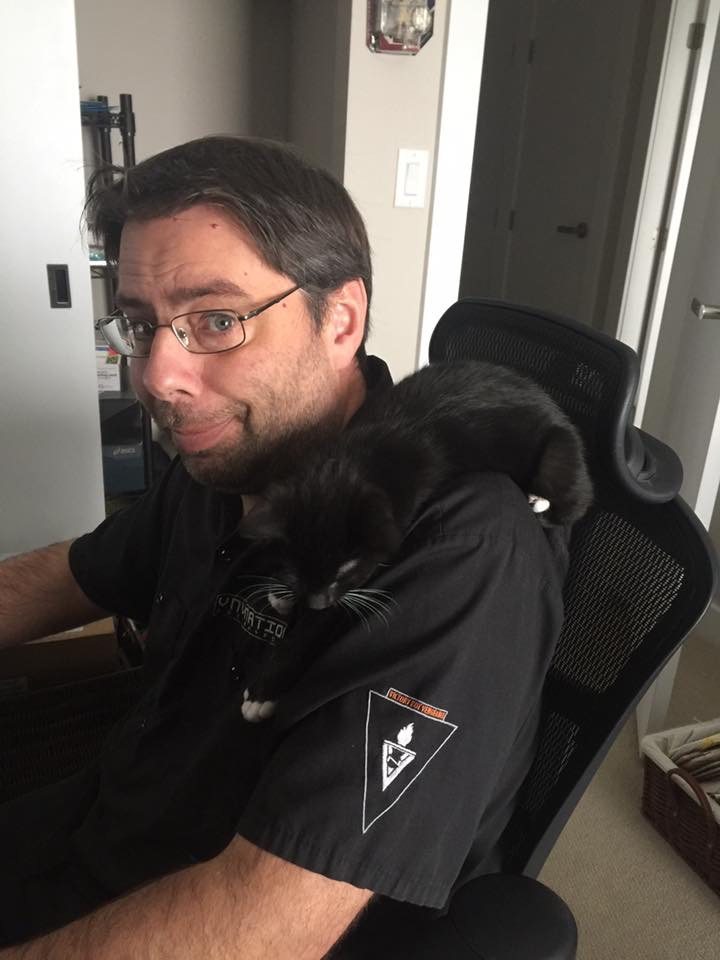 Daniel Camp is now a Canadian-based visual effects artist and has been fortunate enough to work on some major projects — which has been a dream come true.

“I’ve worked on projects I grew up loving, and directors I’ve admired. I’ve worked at some incredible companies, and the work I’m doing now with Digital Domain on projects like ‘Black Widow’ and ‘WandaVision’ is really incredible. I’ve also worked on projects like ‘Solo: A Star Wars Story,’ ‘Warcraft,’ ‘The Amazing Spider-Man,’ ‘Ready Player One,’ ‘Aladdin,’ ‘Tim Burton’s Alice in Wonderland’ and ‘Terminator: Dark Fate’ to name just a few. Digital Domain also has some major projects coming soon I can’t wait to jump into,” noted Camp.

It’s a common story for visual effects artists, but ever since Camp was a young kid, he just fell in love with movies.

“I grew up watching ‘Star Wars’ and a lot of visual effect-heavy films of the 1980s, but it was really ‘Tron’ where I knew I wanted to make movies. But I never thought I’d reach a level where I could work on movies and there weren’t any schools doing visual effects, so I focused on art,” said Camp.

One day, Camp said, he answered a newspaper ad for a position as a game tester at Midway Games in San Diego. “At the time, I was in college and enrolled in a program called ‘Digital Art and Multimedia’ — which in the early 1990s was focused on Photoshop-type work. I was hoping video games would be an entry point for something more.”

After a year of playing video games and hunting for bugs, Camp pointed out, he applied for an internal job helping out with the motion capture department. Camp’s experience with mocap in gaming eventually led to other opportunities, including his first work in movies for the ‘Matrix’ sequels.

“After that, I joined Sony Pictures Imageworks in Los Angeles to work on set for ‘Polar Express,’ ‘Monster House’ and ‘Beowulf.’ Once the mocap on ‘Beowulf’ was complete, they didn’t have any more mocap projects for me, so they asked if I was willing to learn how to do cloth and hair.”

That was how Camp got into what is now called Character FX, or CFX for short. “I went on to work for several other companies, including Blur, Industrial Light and Magic, and eventually my current employer, Digital Domain.”

According to Camp, with Character FX, animators move digital characters in the scenes, while the team gets to work on everything that is secondary to those characters, including cloth, hair, muscles and skin.

“We do this by creating digital cloth and hair, and giving them properties that will allow them to simulate how they would look in the real world. For cloth, we can change a costume to change its gait and act like silk, denim or leather, by changing several different properties. Same for hair. We can determine how stiff or loose hair moves, and even things like how the hair would react while moving in slow motion or underwater,” Camp explained.

At first, Camp said, he was resistant to move to Canada, but has come to love it.
“Six years ago, I watched as the opportunities in Hollywood were drying up, as a lot of the film and television studios moved the work to other states and countries that offered lucrative tax incentives.”

Eventually, Camp said, an opportunity came up that was just too good to pass up. “My wife and I decided to move our family to Vancouver, B.C. and try out life in Canada, and it was the best decision we’ve made. We have no regrets. We love living here, and we are very happy with how welcoming Canadians have been.”

As for Canadian film production, the industry is strong, Camp said. “The industry provides a lot of work and boosts the local economies. There are also numerous visual effects studios that employ a lot of employees, many of them Canadian. Several Canadian film schools are also teaching the next generation of artists, who will also one day join our growing teams.”

Some of the highlights in Camp’s career have included interacting with actors and directing scenes for them, being on movie sets and taking a script and turning it into something that will live on forever as a movie, and it has been a privilege to meet and talk to some well-known industry legends.

Camp’s continued passion is also writing children’s books. “I needed an artistic outlet that was my own, where I was in control of the direction of what I made. My son, who is now nine years old, kept asking me to make a children’s book.”

Camp said the response from family and friends was overwhelming, so he soon made a second book — “The Last Pumpkin Picked,” which involves his favourite holiday of Halloween. “My third book, ‘There’s a Kraken Under the Bed,’ has a special place in my heart, as it’s for my son, who is autistic. This book takes fears and anxiety he dealt with and turns them into monsters, and then provides coping mechanisms that can be used to bring comfort.”

Camp is currently working on his fourth book — “Halloween A to Z: Under the Sea.”

Working in the entertainment industry can be tough, Camp said, but he wouldn’t change it for anything in the world. “It’s an industry filled with many amazing people who love what they do, and it continues to humble me when I meet fans who are still wowed by the magic. Just as movies have always inspired me, I hope I can be a small part of providing that inspiration for others.”

To find out more about Camp’s work and current projects check out danielccamp.com.