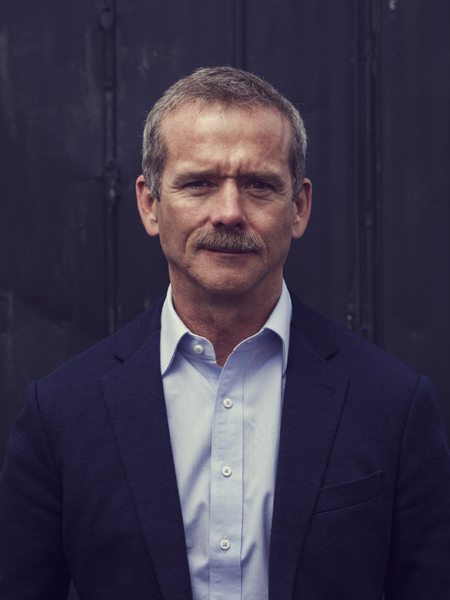 Space — followed by some obscure “Star Trek” reference, from some fictional pop culture character named Kirk. He too was at the helm of a well-known spacecraft. But in the real world, Canada is home to one of the most beloved and rock star astronauts. Not only was Chris Hadfield the first Canadian commander of the International Space Station, he’s also a musician, speaker, and he continues to be an accomplished best-selling author of several books, including “An Astronaut’s Guide to Life on Earth.” Hadfield’s first fiction novel, “The Apollo Murders” is set to be released this fall.

Hadfield was aboard the Shuttle Atlantis and helped build the Mir Space Station, was aboard the Shuttle Endeavour and performed two spacewalks and was formerly NASA’s director of operations. He’s a decorated engineer and test pilot too (he was named the Top Test Pilot in both the U.S. Air Force and the U.S. Navy), and was inducted into Canada’s Aviation Hall of Fame. Hadfield’s video of David Bowie’s “Space Oddity” — seen by over 75 million people — was also called, “possibly the most poignant version of the song ever created,” by Bowie himself. Additionally, Hadfield is an adjunct professor at the University of Waterloo and chair of the board of the Open Lunar Foundation. He also leads the space stream at Creative Destruction Lab, one of the world’s top tech incubators.

But, “The Apollo Murders” is what Hadfield is hugely excited about in 2021. “I’ve taken a few chances in my life and I try to always be as ready for them as I could and do them as well as I could. But, to step into writing fiction, is a big step and a very competitive field. I’ve always enjoyed writing. It’s kind of been my first love and I did it a lot in school and I’ve written small things since. The three previous books I wrote, I worked with a team of people to write, to make sure, because I was busy doing a lot of other things. This one, is 100 per cent mine. That’s a real big step for me.” The book is scheduled for release Oct. 12.

Hadfield noted he completed the book around Jan. 10, did a re-write and handed in the manuscript in February. He added there are three publishers publishing the book — one in the U.K., one in Canada and one in the United States. Two editors, he added, have had a chance to read the book and “it’s so gratifying to hear they are loving it.”

“It’s an international thriller of a book with a lot of it set in space in 1973 with the Soviet Union and the U.S. It was such a fascinating and rich time to pull a story out of. Over half of the characters in the book are real people. It was a lot of fun to put together.” The link for pre-ordering a copy of “The Apollo Murders” is  https://chrishadfield.ca/books/.

Hadfield said he always tries to be a good observer of the world, as he goes through it. “I’m always curious as to why things are the way they are.” There’s a lot of that, he believes, in his writing. “I’m always very interested in how does it work. When you’re writing a book, the details of how this all works and putting it all into a story has been a real delight for me.”

With COVID-19, realistically, it’s given a lot of authors a chance to write. “There’s going to be a lot of books out in the fall naturally, and that’s good,” Hadfield said. The book is going to be available and his previous three books, the album he wrote and released and the Masterclass he has done have been going strong during the pandemic. “Just because people are changing their individual patterns and have a little more time at home to go through things like that. I think there’s going to be a lot of room for this book.”

Closer to the release date, Hadfield said he and his team will market the book accordingly. “And I really want to get out and talk to people about the book directly. I’ve done book tours for the previous three books and we’ll do that, if the fates allow.”

“We’ll be recording an audio version of it. We haven’t chosen who the reader is going to be. We’re just now selecting. You want someone who has a real good sense and voice for this type of book. I could do it myself, but I’m not an actor. It’s probably better to get a really good voice actor to do it,” Hadfield added.

Hadfield pointed out he often publicly speaks about how to deal with isolation and motivation in the face of external dangers, “very much like the life of an astronaut on a spaceship.”

“I think there’s some very valuable and applicable lessons used there. I’ve been working with companies all around the world to try and work with their staff to be productive during this time,” he added. Hadfield also works directly with SpaceX and Virgin Galactic consulting and advising and for other space companies doing specific things in the space field. “I consult with the Canadian Space Agency and with NASA, as well.”

According to Hadfield, he said he doesn’t know how he could have ever written the book if he hadn’t had this time out from his normal pattern. “Normally, it involves so much travel, it just eats all of my time. To be able to just travel virtually now and work with everybody all around the world from home, that’s really been a boon and it’s freed up my time to be able to do this writing.”

It’s also an exciting time in history right now with the Mars Perseverance rover landing and exploration program. “That is so hard to do. It’s almost impossible. And yet, the genius engineers who have worked on that, masterminded through the NASA Jet Propulsion Lab, they’ve made it again look like this is just a simple thing to do. It is just so near impossible. But not just that — three ships have arrived in Mars over the last couple of weeks. One from China, one from the UAE and now one down to the surface. The Chinese have a rover they are going to try to land over the next couple of months, but it’s currently orbiting Mars. All of that is pretty heartening. The fact Perseverance has a helicopter, a little drone, to be able to go explore — that’s pretty cool.”

These missions might be really opening the door to discovering if we are alone in the universe or not, Hadfield said. “Mars has a very similar past to the Earth. Three billion years ago, our two planets were very similar in environment and we know life developed on Earth four billion years ago.”

“Who knows, it could be possible there still may be some primitive life form still there on Mars, that will be very interesting to discover,” he added. “I think that’s fun and important for humanity.”

“But, also, what we’re learning about the Earth itself right now. The number of sensors we’ve got going around the planet telling us an enormous amount about the ecology of the Earth and what’s really happening. So we can have informed decisions about what to do when there’s a cold snap in Texas or overall warming of the world. You can’t judge those things locally, you need global sensors,” Hadfield explained.

Starlink is now available in Canada too. “Anybody in the country can stick out this little pizza-size dish and get high-speed Internet, not everybody. We haven’t covered all latitudes yet, but that’s a real boon,” said Hadfield, which is another “cool” space development of importance.

And, all of the leading space agencies of the world are committing, right now, to orbiting and settling the Moon with people, said Hadfield. “We did that as early explorers 50 years ago, but now we’re at the point where we can actually start to have an economic Earth-Moon system. We’ve just scratched a tiny bit of the surface of the Moon. We have no real idea of the mineral wealth of the Moon and its bigger than Africa, and Africa is huge. To think now, our technology is good enough and with what SpaceX is doing with the starship to drop the cost to get there and back, it’s like the invention of some great transportation vehicle.”

“It’s exciting news right now, and Canada is right in the thick of it. Which is great. We’re part of the lunar gateway. We have two Canadians assigned to go to the Moon. And one of them, at least, is bound to be from Alberta,” he noted.

For Hadfield, it’s all woven together because he’s been writing “The Apollo Murders” with all of the factual aspects of space travel and what is currently going on in real-life with the Moon is all going on parallel.

Through Hadfield’s involvement with the Open Lunar Foundation, the foundation is looking at what the laws are going to be on the Moon, which could include what property rights will look like and whose laws do people live under. “They are intriguing questions. It’s an uninhabited continent larger than Africa and we’re not disrupting anybody else’s existing life. How we choose to settle the Moon, is going to determine how we go everywhere else.”

“I think it’s a very important question we need to work on and whether we can just live with the outer space treaty we wrote in the late-1960s or whether we’re all going to sign the Moon treaty we penned in the late-1970s or some derivative of those, we need to do that. Russia and China have just signed an agreement for how they want to start working towards putting people on the Moon. It’s a pivotal moment in history and I’m delighted — fact and fiction — to be in the middle of all of it,” said Hadfield.