Remembering to be thankful on Remembrance Day 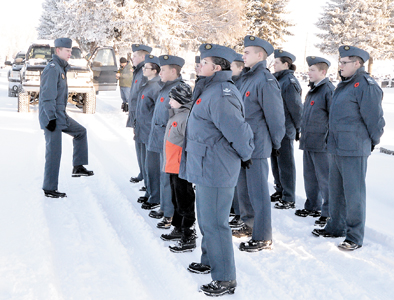 Have you seen the headlines in recent days on social media?

Oh yeah, and in other news, communities big and small across Canada celebrated Remembrance Day to honour those who served and are still serving from major conflicts across the globe while keeping the peace and freedom at home.

Like clockwork every Remembrance Day, people use Nov. 11 as a political grenade to be lobbed back and forth in hopes it will explode into the shrapnel of who gets to finish ahead of who in how much they want to be perceived as loving their country.

And meanwhile, the proud men and women who have signed up for military duty are caught in the middle of partisan politics, people who have had the purity of simply wanting to be of service to one’s country in a military career.

I will admit, I also got caught up in it, slightly annoyed at those wanting to separate from Canada because of the latest national election, while also wearing a poppy which signified those who lost their lives in service in World War I and II for Canada in upholding its freedoms.

Also, I couldn’t quite figure out the Team Kaepernick and Team Cherry camps bemoaning the unemployment of their champions of freedom while ceremoniously cheering on the unemployment of the other while the exact same principle was being applied …an employer was unhappy with a sports entertainer weighing in on the arena of politics and what constitutes freedom.

One man’s patriot is another man’s traitor.

But a friend shook me out of the haze to take a step back and not lose sight of Nov. 11, which helped me enjoy my coverage of the ceremonies more.

While this year’s service was truly wonderful, featuring a standing-room only crowd at the Taber Community Centre Auditorium, one moment crystallized the whole experience for me when I saw World War II veteran Burns Wood embrace Mary Saruwatari after spectators heard of her harrowing experience of forced internment in the western interior of the country as fallout.

Through all of the trials and tribulations of her family, fear thawed into love as contributing members of southern Alberta as the years passed.
While Canada eventually warmed to their new Japanese neighbours, it wasn’t always like that.

The Taber Times was as guilty as anybody in Taber at the time during World War II hysteria, running several articles and editorials strongly opposing the relocation of Japanese ‘enemy aliens’ to the Taber area.

‘Surely we can find ways to harvest our sugar crops without inviting the Japs to live in our midst. For a certainty they will stay here if once brought in, and after the war we will be forced with a large population of Japs that will hang as millstones around our guilty necks, the necks of our children, in just retribution to our lack of ability, our laziness or our greed bringing them in.’ -Taber Times, March 12, 1942.

As Veterans have fought abroad in some of the most hellish conditions, I always think to myself when I see certain memes, how can anyone possibly think a Veteran would be anti-immigrant?

They have seen the nightmarish conditions they have fought and died in, in some of these far-away lands first hand and would know why people flee to their borders for a better life.

A story circulated around social media about the traditional red poppy being co-opted by a rainbow poppy by the LGBTQ community in a post by failed Conservative candidate Cyara Bird. The story has since been proven to be false by multiple credible sources, yet prominent people in this community still keep the post up. While now taken down, I saw a post stating ‘queers don’t bleed red’, adding his grandparents would be rolling around in their graves right now.

While still angry about it today, I also thought about a lesbian friend I traveled with while visiting Croatia, and her military service in Europe. The comment was an insult to all those who serve in the LGBTQ community, along with heterosexual service people who have fought valiantly in countries for freedom to exist where being gay means death.

All through recorded history you can see where both conservative and liberal governments have both supported and slighted Veterans in the actions they have taken. When those actions happen they must both be applauded and ridiculed no matter who is the government of the day. No political party has exclusive rights on who cares about Veterans more.

As a friend reminded me on Facebook when I made my separatist rant, when you stay focused on what Remembrance Day is all about, the outside noise of social media can be quieted.

Seeing people dressed in their Sunday best at the Taber Legion for the Veterans Supper, seeing kids from 225 Royal Canadian Air Cadet Squadron Taber Comet brave the bitter cold to honour the memory of those who served at the Taber Cemetery and how a packed crowd hung on every word at the Taber Community Centre Auditorium. Little moments that turn into big ones when you remember to remember.

So thank you to all those who have served both past and present in fighting for noble ideals bigger than yourselves. It is an honour to cover the ceremonies, either in Vauxhall or Taber, every year.

Issues still need to be discussed involving veterans, that is the very right of free speech that men and women have fought and died for. But for one glorious moment, for those two minutes of silence where we bow our heads to remember all the wonderful things that Veterans helped make possible, it is they that are first and foremost in our hearts.