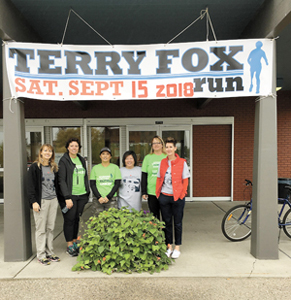 By Colleen Pack
For the Taber Times

My grandpa, my father, my father-in-law, my friends, my friend’s child, my neighbours, patients I care for in the hospital as a nurse are just a few of the people in my life that have been diagnosed with cancer.

Terry Fox began his Marathon of Hope in 1980. His goal was to run across Canada to raise money and awareness for cancer research.

This Saturday, at 9 a.m. (registration at 8:30), the Marathon of Hope continues in the town of Taber.

I have vivid memories of my grandpa suffering the effects of cancer.

My work as a nurse puts me in a position to see patients valiantly suffering the ravages of cancer.

Terry Fox said, “I guess that one of the most important things I’ve learned is that nothing is ever completely bad. Even cancer. It has made me a better person. It has given me courage and a sense of purpose I never had before. But you don’t have to do like I did…wait until you lose a leg or get some awful disease, before you take the time to find out what kind of stuff you’re really made of. You can start now. Anybody can.”

Terry Fox’s legacy can help us make something good come out of something bad, even cancer. Thanks to the Terry Fox Run, I also have vivid memories as a young child participating with my dad in the Terry Fox Run. I passed that legacy onto my children and have been participating as a family in the Terry Fox Run since they were very young. I enjoy working with wonderful volunteers each September when it is time to plan the run. I keep a running list in my heart of patients I’ve cared for in the hospital who battle cancer; some are cancer-free, some are working towards being cancer-free and some are cancer-free in heaven.

I run for loved ones and strangers, I raise money for them, I bring out my children to the Terry Fox Run so that we can make good things come from the awful disease of cancer. The Terry Fox Run makes this happen.

While the Taber Terry Fox Run is a relatively small group of participants and volunteers, it is a mighty group that raises considerable funds for Terry’s dream of continuing cancer research.

The goal of the research is, ultimately, to find a cure, but also find new drugs and treatments to eliminate cancer and prolong life.

This year, the Terry Fox Organizing Committee of Taber is honoured to welcome a special guest to our run.

Fred Fox, brother to Terry, has first-hand knowledge of Terry’s vision and keeping the Marathon of Hope continuing. Fred Fox will be the guest speaker and start the run for 2019.

Everyone is welcome at this family and dog-friendly event. Fred Fox will also be at St. Patrick School on Sept. 12 to speak with the students and receive a special presentation of the Taber Terry Fox Committee’s quilt to be hung in the newly announced Terry Fox Museum.

On Friday, Sept. 13, the Scotiabank will host the annual Terry Fox Bake Sale starting at 9:30 a.m.

Money raised at the bake sale will be matched dollar for dollar by Scotiabank.

Everyone can participate in some way in the Terry Fox Run. You don’t have to donate great amounts of money. Every single dollar helps.

You don’t have to run long distances. Every person counts and raises awareness. Come out to the Terry Fox Run this Saturday and help keep Terry’s dream of making good things come out of the awfulness that is cancer.