Krizsan influence will be missed at M.D. of Taber 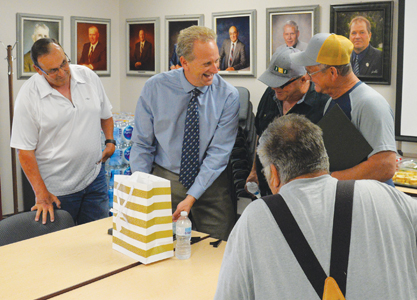 BON VOYAGE: The M.D. of Taber hosted a farewell for Derrick Krizsan on Monday afternoon in the M.D. Reeves Room where the departing CAO got a chance to say goodbye to residents and staff. TIMES PHOTO BY COLE PARKINSON

As this issue of the Taber Times comes out to the public, it will mark the last official working week of CAO Derrick Krizsan, in his nearly 19-year career with the M.D. of Taber.

As one will have read in recent Letters to the Editor, one may hear on coffee row gossip and what can only be assumed to be said in closed-door sessions, his resignation has not come without some controversy. And for the life of me, in my long tenure myself at The Taber Times with professional interactions with Krizsan, I can’t figure why.

First, I read there is the head-scratching assumption that news sources (i.e. us) are keeping his resignation ‘quiet’, as if information can’t get around in a small community or social media. Krizsan’s resignation came on the heels of accepting the same position with the Municipal District of Willow Creek in which I’m willing to bet he is being paid the same, if not more. If a black cloud had been surrounding Krizsan’s circumstances at the M.D., that reputation certainly did not make its way to other municipalities in the region, having been head hunted by multiple organizations.

If the M.D. were parting on bad terms with Krizsan, they certainly did not word it that way at the very start of its press release stating they have ‘reluctantly’ accepted the resignation of Krizsan and then would go on to list his many accomplishments as Municipal Administrator since 2006 in recognizing ‘his commitment to always faithfully, diligently, honestly and honourably fulfilling his duties as Municipal Administrator.’

Take a look at the business that has been attracted to the M.D. of Taber under Krizsan’s tenure, its extremely competitive mill rates, ample secured supplies of gravel, tens of thousands acres of tax recovery land, regional water service commissions, growth of hamlets, bridge, road and airport enhancements, an economically viable and efficient new fire service (six stations at just over $700,000 total), a world-class shooting range, the introduction of the Community Peace Officer Program to address rural enforcement needs, and a public work’s building that looks like it will have a 100 years of traction out of it in building greater work efficiencies for the region. Krizsan was given a life-time membership at the M.D. shooting range and helped broker inter-municipal partnership after inter-municipal partnership during his tenure as CAO/municipal administrator. You do not achieve that without some sort of diplomacy skills into trying to broker partnerships that are mutually beneficial.

While no success happens in an individual vacuum, the CAO/Municipal Administrator position is the go-to guy to equip council and staff with the necessary information and tools to make the most educated decisions. And once those decisions and actions are implemented, Krizsan was quick to give credit where credit was due with a man who shied away from the spotlight, even with the Society of Local Government Manager’s Award of Excellence back in May.

“I thank the people that I work with. There is not a single individual CAO in any municipality who could be awarded this award without benefiting from the incredible people that they are surrounded with at all levels of a municipal organization.It’s a team effort, municipal government is a team sport. We have to work together to accomplish our many goals. Anything that I have accomplished in my 13 years I give credit to the staff here at the M.D. they are professional in every regard,” said Krizsan in an interview with The Times in getting his award, not stopping there in the praise of others.

They say CAOs of municipalities are hired to be fired and I never understood the saying. And to be clear, Krizsan wasn’t fired, but rather resigned and took a new position.

I’d much rather have the stability of a proven CAO that has helped bring prosperity to a region rather than a revolving door at the position. Real, concrete growth in a municipality is not a race, but rather a marathon in getting initiatives implemented for steady, sustainable, healthy growth. Having familiarity with a region is better than someone having to learn from scratch consistently and whose tenure is so short, very few initiatives can be implemented under their tenure that can been seen through from start to finish.

If I’m seeing genuine growth in my region, I think it’s good business sense to have stability at the municipality’s highest paid public position instead of seeing constant turnover. In the private business sector, would you not want the same thing?

I’m sure the Taber Times and Vauxhall Advance was not always on the top of Krizsan’s Christmas card list when some controversy made its way to the municipality’s doorstep as happens with any municipality. But Krizsan was always one to give The Times/Advance the necessary information in a timely manner and direct myself to the necessary people for comment, including himself. I made an inquiry into how much M.D. council spends its meetings in camera (behind closed doors in closed session) and I had the information within a day-and-a-half, along with the links to verify. Knowing the Municipal Government Act like the back of his hand, Krizsan was not one to take its interpretations fast and loose in spirit when it came to council dealings.

Obviously some discord has happened in M.D. council (closed-door chambers, beyond the prying eyes of the newspaper), in recent months, but if certain accusations were serious enough of malpractice with concrete proof, I’m imagining someone would have come to my open-door policy to talk about it, yet no one chose to.

And show me a workplace where there has never been clashes with personalities/visions and I’ll show you Peter Pan’s Neverland, it’s a work of fiction that workplaces never have any friction.

Krizsan passed on the opportunity to have a final piece ran on him, quite happy with the job The Times did when he received his municipal administrator award as a lasting impression.

Krizsan certainly could have used the opportunity to take a parting shot at his naysayers in his parting article as he makes his way to the M.D. of Willow Creek, but chose not to, preferring once again to give positive remarks to his council and the people he worked with in conversation. Words he once again echoed at his farewell meet and greet on Monday afternoon.

It is an attitude like that where while there was maybe bumps in the road, the M.D. never saw itself on the provincial or national landscape media wise for all the wrong reasons.

The M.D. of Taber was not a place Krizsan simply punched a paycheque from, parachuting in and out of the community, he was invested in it. He made many appearances after hours at community events both in Barnwell and the M.D. along with lending his expertise to community groups. Taking a high interest in family athletic pursuits with his son, nary missing a game, he was also a volunteer firefighter and has extended family with his parents in the community, enjoying their golden years.

Making his work days much longer than they need to be as the main bread winner, Krizsan has chosen not to uproot his family for now, given its strong ties, where he will be commuting to M.D. of Willow Creek for the foreseeable future which his employers have agreed to up to his son’s high school graduation.

Personable and professional, Krizsan, much like a retired Jack Dunsmore in his more than quarter-century of service to the M.D. of Taber, the region will have big shoes in fill in their absence of their long-standing service.

Happy trails to you Derrick Krizsan, may you find as many successes in your new job as you did your old. It was an honour working with you.

As I type these final words to this column, I can’t seem to shake a classic Cinderella song from my head…’Don’t Know What You Got (Till It’s Gone).’